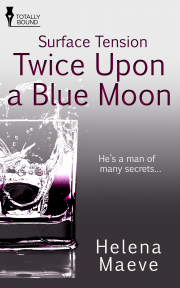 Twice Upon a Blue Moon

Some affairs are like playing with fire, but knowing you’ll get burned is no reason to throw the game.

When her best friend doesn’t show up after a no-strings date with a man she met in a fetish club, Hazel is duty-bound to fetch her from what could be a sticky situation. She doesn’t expect to find her friend’s date so attractive—or so unflappably cool. Not that it matters. Hazel has been burned before and she knows to stay away from handsome men who are patently out of her league, especially when they’re involved with her one and only friend.

Tesla-driving, suit-wearing Dylan more than fits the bill. But every barb Hazel throws him makes him rise to the challenge, and he doesn’t want her to find a way to say no. But not only does Dylan have his own playroom and a sound grip on the S&M lifestyle, he’s also a man of many secrets. Dylan sees a place for Hazel in his bed, but what he wants is more than a one-night stand.

As she acclimates to the idea that Dylan may not be entirely straight or entirely single, Hazel soon finds herself caught between two dominant men whose bond seems to balance on a knife’s point.

The dashboard clock read one fifty-two. Sadie’s hour had elapsed by two minutes. There was no sign of her when Hazel glanced in the side mirror. She craned her neck over the seat, ignoring the frayed upholstery as she often did, just in case the angle of the mirror was playing tricks. No such luck. The rain-spattered sidewalk was bare of pedestrians.

Across the street, four-seven-one Aulden Way loomed like the homeless—half menacingly lost in shadow, half dolefully run-down.

Hazel drew her lower lip between her teeth. It was just two minutes. Sadie probably got distracted, or maybe adventure time with Mr. Tall, Dark and Handsome ran over schedule.

Or, failing that, she was already dead and the longer Hazel dawdled, the more time Tall, Dark and Handsome had to dispose of the body. Her insides roiled at the thought. Too much CSI. Sadie’s track record with men slanted more toward the chronically unable to commit than the Norman Bates types.

Sadie’s probably fine, Hazel told herself. The upholstery screeched as she twisted away.

She made a valiant attempt to turn back to her book, defying the kernel of panic blooming in her gut. Her eyes had just begun to glaze over the spidery print when a door clanged open somewhere behind the car.

Hazel twisted in her seat, paperback flying from her hands to nestle somewhere on the floor of the Volvo. A huddled pair stood outside number four-seven-one, zipping up their jackets as they conversed in low voices. Hazel took in their beanies and distressed, low-slung jeans and glanced away again. Too short, too frumpy. No ankle-breaking stilettos.

Hazel settled back in the seat, heart in her throat and hand on the pepper spray can dangling from the car key. The pair neared at a sluggish pace until eventually they passed the Volvo. They were holding hands.

Hazel watched them until they disappeared from view. Then she tore the keys out of the ignition and shoved open the car door. Instantly, the night chill rushed in to meet her. She stomped her way to the brownstone with a shiver as the icy wind seeped under her clothes. The denim jacket was poor cover from the cold front that had rolled in over the city.

At least it’s stopped raining. She tested the front door. Small mercies. The door swung open with the barest nudge.

Two, three years ago, easy entry into an apartment building on this street would’ve been unthinkable. Long live the yuppies and their cash. Security cameras glared down at her from the ceiling. The hallway lamps all worked, too, progressively casting their warm glow over bare brick walls as Hazel started up the stairs. She couldn’t see more than the next story up, but the motion sensors faithfully tracked her steps until she hit the third floor.

Sadie had mentioned that Tall, Dark and Handsome lived in three-B. Judging by the lettering on the doorbell, he also went by ‘Best’. Hazel folded her fingers around the pepper spray can as she raised her other fist to the metal door.

Two loud raps tolled like claps of thunder. She winced with each one.

Seconds passed before the door clanged and unlatched. A dark-haired man stood in the gap wearing dark slacks and a white shirt—a Hugo Boss magazine spread made flesh. He cocked his head, gaze gliding down her body. “Can I…help you?”

He didn’t seem to know what to do with Hazel’s jean and jean outfit. Good. She was the Hardy to Sadie’s Laurel, except blonde and pear-shaped. Where Sadie was slim and angular, Hazel strongly identified with the titular character in Kung-Fu Panda.

She could and would gladly sit on Mr. Best if he tried to stand in her way.

“Hazel!” Sadie’s voice rang out from somewhere inside the loft. She came into view a moment later, hopping on one foot as she struggled to slot her red pump onto the other. “Hey. What’re you doin’ here?” Whenever she let her guard down, Sadie’s accent came through loud and clear. Hazel could practically smell the hay bales.

Hazel tried not to squirm under their combined scrutiny. “It’s been an hour.” You were taking too long.

Best backed out of the doorway with a flourish. “Would you like to come in?” He flicked a hand in invitation, a soft smile playing across his bowed lips. “I make excellent margaritas.”

Sadie finally got her shoes on. “Sorry, we kinda lost track of time.” She pulled down the hem of her leather skirt. She didn’t seem to be sporting any bruises. “Didn’t we, darlin’?” Her dimpled smiles were known for melting hearts. It was a shame Sadie had a habit of squandering them on useless tools who never seemed to treat her right.

“It was an absolute pleasure,” Best replied. The kiss he planted on Sadie’s temple was tender enough to make Hazel want to look away. She didn’t.

Sadie giggled girlishly and slithered out of his arms. “Maybe I’ll see you around?”

“You have my number.” Best trained a pair of chocolate brown eyes on Hazel. “Maybe next time you’ll come in for a drink… I didn’t catch your name.”

Hazel started for the stairs, content to disregard Sadie’s scandalized expression. She heard her apologize as she pushed past the door of the brownstone.

Sadie caught up to her on the sidewalk. “What the hell was that?”

“Did you miss the part where he was flirting with me while you were standing right fucking there?”

“He was just being nice,” Sadie scoffed, flinging her hands up to the heavens.

Hazel did her best to ignore Sadie as she slid behind the wheel. It was too cold and too late to shout at each other in the street. Sadie slammed the passenger side door shut as she climbed in.

“Why do you have to be such a weirdo about this stuff?”

“Really?” Hazel deadpanned. “You’re really going to ask me that?”

Battle-frenzy fled Sadie’s eyes. She tugged a hand through her curly blonde hair. “You know I didn’t mean it like that. I just… I had fun, okay? He’s a nice guy.”

“Does that mean you’ll call him?”

On this point, their opinions diverged dramatically. Sadie was a subscriber to the ‘sorry, I forgot’ school of public relations. She had a habit of stringing men along, even when they were nice and fun—and cool to be with.

Reviewed by Sexy for Review

This was an enigmatic yet enjoyable read. Ms. Maeve opened a world of ménage with twists and turns that left the book hanging with a HFN.

It is a fun and very sexy MMF romance between three very complex characters. I loved the mixture of sexiness and secretiveness that Twice Upon a Blue Moon offered. I loved how quick...

Share what you thought about Twice Upon a Blue Moon and earn reward points.

Let's start with you telling us a little bit about yourself, Helena.
I’m a twenty-something queer lady who does yoga and cooks up a storm. Not (usually) at the same time. I also write sexy romance books featuring various permutations of gutsy women and hot-blooded men.