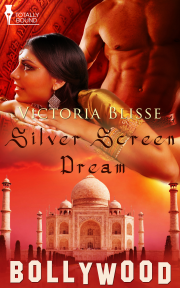 Book 1 in the Djin's Amulet series

When true love conquers all, what is a djinn to do?

Johnny is a djinn, and he has a hard life. His master, Rahul, is a massive Bollywood star who's run off to England to avoid an arranged marriage, a marriage Johnny has to make happen. It's his job.

Rahul further complicates matters by falling for a British Bollywood fan, Laura, whom he meets at a film premiere. How can Johnny get his master back to Mumbai to marry the woman to whom he is pledged and away from the English hussy who is steadily taking more and more of his attention?

Johnny will use revenge and jealousy, but how will he cope when true love is thrown into the mix?

Before we go any further, I should introduce myself. You can call me Johnny. It’s not my name, but you can call me by it. I’m a Djinn and we don’t give out our real names willy-nilly like you daft humans. We know the power of a name and are very cagey when it comes to introductions.

Occasionally, though, we get tricked, and that’s what happened to me many moons ago, and now I look after a young human called Rahul. He’s not the man who tricked me, that was his father’s father’s father’s father’s father or something like that. Some Djinns get let off easy with only a generation or two of service before a kind human wishes them free, but somehow I managed to get stuck with a family full of selfish bastards. I just get handed down from Khan to Khan and do their bidding. It’s not a thrilling life.

I don’t interfere in the affairs of mortals unless I am explicitly ordered to. Well, usually. It’s not a hard and fast rule. If Rahul were to trip up and fall in the Ganges, for example, I’d leap to his rescue because he would be in mortal danger, no explicit order needed. I’m bound to the dark-haired, blue-eyed fool, and so I have to keep him alive and well until it’s time for his natural demise.

Rahul doesn’t mistreat me, he doesn’t call on me at all hours to make him magic beverages or massage his calloused feet like his father did. I do very little for him, truth be told. He’s asked me to grant him one wish in all his life so far, and that was to make him famous. So we hit Mumbai and he became an overnight Bollywood sensation.

He’s a good-looking lad, for a human, with russet-toned skin and eyes that shine like hidden sapphires, and so he fell into the acting life with ease. I barely had to use any magical influence at all. I accompany him on set, but I tend to ignore the whole rigmarole myself. I prefer filling in the Mumbai Times crossword than watching the simpering girls dancing and the boy meets girl, loses girl, finds girl storylines of Bollywood.

Some of my relatives would kill for my glamorous life, but then they’re trapped in bogs, deserts and wastelands. Some days I wish I was in a wasteland. Let me tell you the tale of when my Master went to London and the headache I had looking after him there. I’m a Djinn, we like to tell stories and moan. It’s a little known fact.

Rahul was just finishing up work on the latest Bollywood blockbuster, Benazir, which means Incomparable to all you English-speaking folks. I can’t remember what it was about, but it was the typical Bollywood love story and I mostly ignored it during filming.

“Johnny,” my master summoned me.

I put down my needlework—what, even Djinn need a hobby—and I did the impressive poof thing complete with smoke, lightning and glowing, red eyes.

“Oh, stop messing,” he snapped. “This is important.”

“Yes, Master.” I bowed and changed into Rahul’s preferred envisagement. I find it to be rather constricting to be in human form, but I have to do his bidding whether I want to or not.

“I’ve just spoken to Uncle Rajeesh, and he’s spouting some nonsense about marriage.”

“Well, you’re getting on now, Rahul. You’re in your late twenties. It’s time you settled down.”

Johnny is a Djinn. He has been bound to Rahul's family for centuries. He is duty bound by Rahul's fathers deathbed wish - that his son marry the woman he choose for him. The trouble is Rahul is...

I really enjoyed Silver Screen Dream. It's interesting the way it's been written from the perspectives of two characters; Johnny and Laura, which gives you an insight into two sides of the story. Victoria...

Share what you thought about Silver Screen Dream and earn reward points.

Other books in the Djin's Amulet seriesView Series Page