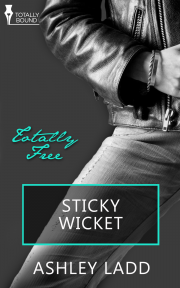 At his twentieth A-levels reunion, former class nerd Chris runs into his former school crush, former captain of the cricket team, Dan. Chris had worshipped him from afar, afraid to admit his feelings to Dan. Then they'd gone their separate ways.

When Chris runs into sexier than ever Dan at the reunion, he's as hot for the man as he ever was. Now he's a captain of industry, but he still feels like that school boy. Chris has one weekend to prove to Dan he's the man for him, and this nerd is going to use every trick in the book not only to seduce, but win his man.

I agree with the first review...I wish it was longer because the author was amazing.

I like the way she writes. It was short but good.

Share what you thought about Sticky Wicket and earn reward points.