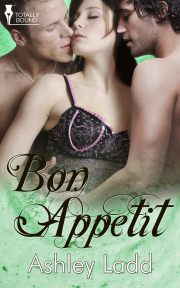 Being a lexical gustatory synethesist is the least of Demi's secrets: her husband's impotency and engaging in a ménage with his super sexy cousin would really make her friends' heads spin.

Demi is a lexical gustatory synethesist. In other words, she tastes words. Penises taste like mint chocolate chip ice cream, one of her favourites. Sex toys taste more like dry toast.

Too bad as her husband, Alex, is impotent and she longs for a hot, hard, juicy penis, not that she'd ever crush him with that information.

But Alex isn't stupid and he'll do anything to make Demi happy. So he invites his cousin Matt into their bed and wishes them all a bon appétit.

Demi Summers squirmed and writhed as her husband, Alex, suckled her nipple, and his thumb massaged her clit. Yearning for more, she pushed her breast deeper into his mouth.

At forty-five, her husband had finally grown into his skin. His shoulders were no longer bony with his skin stretched taut over them, but strong and broad like his Viking ancestors. When he glanced up at her, passion filled his normally laughing, slate grey eyes, showing more than a hint of the storms that brewed. Moonbeams glanced off his hair, making it brighter than it already was.

Around her breast he asked in a ragged voice, 'What else would you like me to do?'

'Fuck me. No mercy,' she longed to say but bit her lip.

Ever since Alex's diabetes had grown severe, he hadn't been able to get an erection solid enough to fuck her. His doctors were afraid to give him the miracle medications on the market because of his poor health. Instead, she said on a moan, 'Lick my pussy.'

Alex lifted his head and with a twinkle in his eyes, rubbed his chin across her breast, grazing her flesh with his scratchy five o'clock shadow. 'Would you like me to get the toys?'

The toys were a poor substitution for what she longed for. The word 'toys' made her 'taste' dry toast with only the merest hint of butter. But fearing she'd never get the real thing again, afraid she'd slaughter his feelings if she slipped and admitted that, she nodded. 'Yes.'

When he left her and dug around in their private drawer, the mattress shifted and she rolled to her side. She let her gaze drink in her sexy hubby, let herself wish his cock would get hard enough to fuck her, wish she could feel a man's big, hot cock driving into her. Two years was a long time to go without being one with a man.

Although she'd never say it to him, she imagined their trysts must be the same as having lesbian sex. It felt good. She had orgasms. But she sorely missed having a real cock plunge her pussy. She missed the full union of being with a man. She missed the rapture and the ecstasy.

Guilt and shame overcame her. It wasn't Alex's fault he couldn't get an erection. He was still a sexy, loving man in every other way. His name tasted like delicious sweet apples on the tip of her tongue. He understood her rare condition, Lexical-gustatory synaesthesia, and he'd never treated her like a freak or made fun of her for tasting words. His kisses rocketed her to heaven, and she still longed for the day he would fuck her until she was in utter bliss.

Her mother had warned her about marrying a man twelve years older, had predicted this very thing. But Alex was only forty-five, not seventy. His diabetes had become debilitating early in life.

Alex turned to her with a wicked smile. He crawled onto the bed, pulled her into the middle of the mattress and buried his face between her legs. His head dipped until she could only see his springy hair, then his tongue swept her slit, long and sensually. He lapped at her and sucked her clit.

Share what you thought about Bon Appétit and earn reward points.