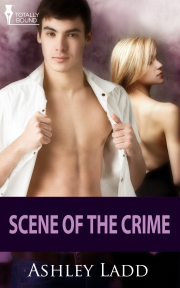 Scene of the Crime

Robin didn't know whether to be relieved or appalled that the sexy man she'd fallen into bed with wasn't her ex-boyfriend, but his adult son.

When Robin returns to her alma mater as a professor of history, she can't believe her ex-boyfriend is still on campus much less looking so young and buff after twenty years.

The sexy-as-hell man she'd seen on her first day back, however, isn't her ex but his adult son. Although she wants nothing to do with either of them, they won't leave her head or her heart alone.

Chills struck Robyn Cattrall as she stepped onto the grounds of her alma mater. Memories good and bad blindsided her for several moments. She’d done a lot of soul-searching before accepting a post here as history professor.

But the burnished autumn leaves and chill in the air made her feel alive again. They brought the promise of soon-coming winter with its wonderland of glistening snow, something she’d missed living in south Florida for the past couple of decades.

She consoled herself that as a connoisseur of history, she had learned from past mistakes and knew better than to repeat them. Just because she was back at the scene of her first heartbreak didn’t mean she was doomed to repeat it. She’d make sure she didn’t. Forty-four now, she was a lot wiser than she’d been at twenty-two.

Funny, she felt young on a campus surrounded by twenty-year-olds, especially when a horde of students burst into the sunshine and several young studs eyed her appreciatively.

She did her best not to drool over what might be her future students, and tried hard to keep a pleasantly professional smile. But when she came face to face with the ghost of her first love, Phil Williams, her jaw dropped, her eyes widened and her heart stopped. Unabashedly, she stared.

What was he doing here?

Phil’s glance slid over her without a hint of recognition, and he passed by without a falter in his step.

She hated herself, but she turned and stared at his retreating back as the sea of people parted around her, then swallowed him. How could he not turn to look at her? How could he forget? How could he look so damned good?

She gulped and licked her lips. When someone bumped her, she jolted awake. Embarrassed, she checked her campus map and hurried to her office.

Share what you thought about Scene of the Crime and earn reward points.