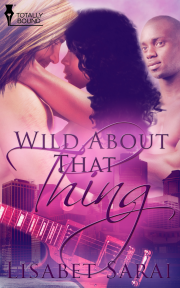 Wild About That Thing

There's more than one way to beat the blues.

Two things are important to Ruby Jones-her teenage son and her struggling club, the Crossroads Blues Bar. Her love life comes in a distant third, despite the efforts of Zeke Chambers to convince her otherwise. Zeke's the lead singer in her house band, a devoted friend, and an occasional lover. He can drive her wild with desire, but can't get her to make a commitment. Deserted by her cheating ex-husband, Ruby's determined she's going to make it on her own. She's hot-blooded like her bluesman daddy-happy to satisfy her physical cravings, but not about to let any man into her heart.

The stranger who takes the stage on the Crossroads open mike night upsets the delicate balance in Ruby's world. Remy Saint-Michel inspires irrational, irresistible lust as well as inexplicable sympathy. Overwhelmed, confused, guilty and worried about her prized independence, Ruby decides that the only way to deal with her two lovers is to push them both away. Zeke and Remy, though, have other ideas.

Ruby could feel it in her bones. It was going to be a good night. Only ten thirty, but most of the tables clustered ‘round the stage were full. Lori had already lugged two extra cases of Heineken—tonight’s beer special—up from the basement, and from the looks of the empties accumulating in front the customers, they were going fast. The bartender caught Ruby’s eye and gave her a thumbs up. Everything under control.

Up front, the Night Travellers hit a dark groove, wailing through Born Under a Bad Sign. Zeke’s fingers flew over the strings, improvising a high riff, while Jojo’s bass kept the song grounded. "If it wasn’t for bad luck, I’d have no luck at all," Zeke growled, torturing his guitar to match the pain in his voice. Damn, but the man sounded black, despite the mop of straw-coloured hair he kept pushing out of his eyes. Born in Mississippi, he must’ve soaked up blues in the water and the air. Certainly he could play with the best. Ruby was lucky to have him and his band, given the pittance she could afford to pay them.

As if he sensed her attention, Zeke picked her out of the shadows at the back of the club. She felt the warmth of the smile he beamed to her, a smile totally at odds with the desperate mood of the song. You know why Zeke plays here, her inner critic commented. You’re just taking advantage of him.

He gets what he wants, she argued with the internal voice that sounded so very much like her mother’s. I treat him fine. Of course, she got as much out of their relationship as he did. Zeke was a strong man with powerful desires. He could set her on fire. It wasn’t her fault that he was so sentimental. You wouldn’t expect it from a rough and tumble guy like Zeke Chambers—ten years a New York cabbie, a guy who’d seen every horror the city could dish out.

Her phone vibrated in her jeans pocket, interrupting her train of thought.

"Okay, okay, Mama! But don’t forget about your meeting tomorrow with Ms Rodriguez."

"Oh, right." Ruby sighed. Isaiah’s grades were good but he was so small that he tended to get bullied. She needed to put a stop to that, somehow. "Thanks, hon. Three thirty, right?"

"I’ll be there, don’t worry. Then we’ll walk back home together. Maybe stop for a banana split."

"But only if you go to bed right now, you understand? I don’t want to have to come upstairs and make you!"

"’Night, sweetie. I’ll see you tomorrow afternoon." Ruby fought against the wave of guilt that threatened to swamp her. Sure, it would be better if she could awaken with her son, make him breakfast and see him off to school like a "normal" mom. But the club kept her up until three a.m. most nights.

Share what you thought about Wild About That Thing and earn reward points.