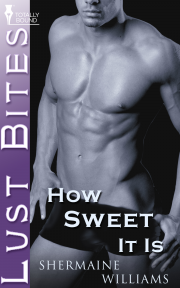 How Sweet It Is

As a successful male escort, Ben's life is sweet. He goes to all the best places with a wide range of women who adore him.

Granted, not all of them would be his first choice and it's difficult to maintain a serious relationship when your job is to provide pleasure to other women, but that is a small price to pay. He has a lovely home, a wonderful lifestyle and wants for nothing.

Maybe it's not what his parents always dreamed of him doing, but he is a professional; that is until Natasha's arrival on the scene.

He fails to anticipate that she is capable of doing what no other woman can…putting his professionalism to the test.

As steam gradually filled the room, Ben stuck his hand under the stream of water to test the temperature before getting in.

“Ben, hurry up and get out of the bathroom.”

Even with the water running and the door closed, the voice of Andrew, his best friend and flatmate, easily carried to his ear. They had known each other for ten years, and Ben had gradually watched him become a metro sexual, spending an endless amount of time preening and posing. Of late, it had gotten worse.

It had started after Ben introduced him to his boss, so he knew he only had himself to blame. As a jobbing actor, Ben had been finding it hard to make ends meet until he began working as a male escort. Now he found it easy and no longer had to worry about money. Once he’d decided to do it, he’d also decided he wasn’t going to tell anyone except Andrew, whom he knew wouldn’t judge him.

His assumption had been correct and Andrew hadn’t judged him. However, he was incurably inquisitive and seemed unable to stop himself bombarding his friend with questions whenever he returned from a ‘date’. Finally unable to take any more, Ben invited him to meet Jacqueline, the owner of the escort agency he worked for and, before he knew it, Andrew had given up his job as a bank clerk in order to become an escort as well. It had only been four months, but he had been impossible ever since, spending a ridiculous amount of time and money on his appearance and generally being really annoying.

For his part, Ben had been working as an escort for ten months and loved it. As he thrust his head under the jet of water, he thought back over the many events he had attended, restaurants he’d eaten at, plays and operas he’d seen, all on the arm of a woman who was paying for the privilege of his company. Before he’d started, he’d assumed the only women who would want an escort would be lacking in the looks department, but he was pleasantly surprised. Not that all of the women were good looking, and some were a few years older than he would normally go for, but he didn’t let any of that faze him. He remained charming and attentive no matter the circumstances.

Ever the professional. That was probably one of the reasons he was so popular.

Share what you thought about How Sweet It Is and earn reward points.