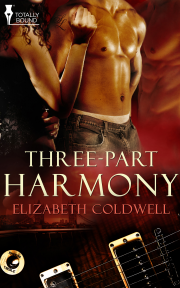 When a new guitarist joins the band, is a loving duet about to become a trio?

When guitarist Mark Deans quits Sweet Lies the week before their concert tour is due to start, it looks like the end of the band, but singer Aimee and her husband Stefan have worked too hard to let that happen. The answer lies in Jake Anderson, who blows them away when he auditions to replace Mark. He's cute, talented-and twelve years younger than Aimee-but there's an instant attraction between them.

Mark quit the band six days before we were due to embark on our comeback tour.

It was the timing that really upset me, more than the news itself. After all, I’d been expecting him to leave at almost any time over the last eleven years, ever since the day I’d told him Stefan and I were getting married. Instead, he’d stayed—channelling all his sense of loss, betrayal and stone-cold determination never to let another woman hurt him the way I had, into songs that catapulted us to a level of international success far beyond our wildest dreams. Even during the eighteen-month hiatus we’d effectively been on between finishing our last tour and starting work on our latest CD, Mark had given no indication he was unhappy with the state of affairs. Indeed, the flow of ideas, the creative understanding between the three of us who wrote the songs, was as strong as it ever had been. So why walk out now, when Older, No Wiser was top of the download charts and the concert promoters were adding extra dates to the tour after the original ones had sold out within hours?

At least he’d had the decency to announce the news to our faces before leaking it on his Twitter feed. When he’d walked into the rehearsal room, lugging his faithful Stratocaster in its battered leather case, I should have realised something was wrong. But somewhere down the years, the almost telepathic understanding we’d once enjoyed had faded, and now I simply assumed he was grumpy after a bad night’s sleep in a strange hotel room.

"Oh, and about time, too!" Paul put his coffee mug down on top of the speaker stack with a theatrical flourish and went to sit behind his drum kit. As half of the rhythm section responsible for keeping time and pulling everything together tightly, he liked to extend that role into the rest of his life. Mark’s lack of punctuality never failed to annoy him.

"Sorry, guys. I would have been here sooner, but—" Mark sighed, pushing a hand through his black hair. "Look, there’s no easy way of saying this, so I’ll just come right out with it. I talked to Jeannie for a couple of hours last night, and I just... I just don’t feel my place is in the band anymore. I’ve got things in my life I need to sort out. Things I should have dealt with years ago. I’m going over to Bodega Bay to stay with Jeannie for a while. She’s going to help me work through them."

"So what you’re saying is you’re walking out on us?" Stefan sounded strangely calm. I was anything but. I knew if I opened my mouth now it would be to emit a scream of pure rage. "A week before we’re supposed to open the tour in Pittsburgh, and you’ve decided that’s it? You’re off?"

"I appreciate this might not be the greatest time to do it, but I just can’t get up on stage night after night. Not with my head where it is right now."

When had Mark stopped talking like the born and bred North London boy he was and started justifying his actions with a stream of mid-Atlantic psycho-babble? Probably about the same time he’d met and married Jeannie Montacute. A New Age therapist who ran an exclusive rehab facility on the California coast, she had encouraged Mark to quit drinking, start eating a macrobiotic diet and perform yoga on a regular basis. Even though they’d split up within two years of the wedding, they were still close. Closer than the rest of us thought, apparently, if the fact he’d gone to her for advice was any proof.

"And it gives me a chance to spend time with the boys," Mark continued. "God knows I haven’t seen enough of them over the last couple of years."

The boys were Mark’s four-year-old twin sons, Gunnar and Sky. He carried photos of them everywhere, dog-eared from being pulled out of his wallet and looked at repeatedly, and their names were embroidered on his guitar strap. A combination of touring and the breakup with Jeannie meant he’d missed their first steps, their first words. Furious as I was with his decision, I couldn’t fail to appreciate his need to watch them grow up.

For a long moment, the five of us exchanged awkward glances. The tension in the room enveloped us like a clammy blanket. Then Davey, always the most forgiving soul, stepped out from behind his bank of keyboards and enfolded Mark in a huge hug.

Share what you thought about Three-part Harmony and earn reward points.