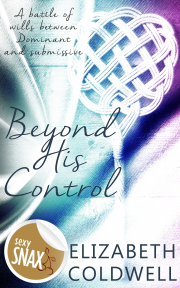 In a battle of wills between Dominant and submissive, who’ll be the one to lose control?

James is my perfect Dom. I’ve landed the job of cleaning his house three times a week. He’s kind, intelligent and handsome, and he knows just how to keep a wilful little brat like me in line. He just has one tiny flaw. James is the ultimate control freak, and that extends to being in control of how he punishes me.

What I really want is to be spanked until I’m breathless and my bottom glows, but James sees that as a loss of control. If he resorts to physical punishment, then as far as he’s concerned, it makes him the loser in our battle of wills. No matter how much I beg or how badly I behave, I can’t make him change his mind.

But now’s my chance. I can see so many opportunities to push his buttons. I know I only have to press the right one and he’ll give me the spanking I crave. It’s a challenge this brat can’t resist, and I’m not going to stop until I’m the one who’s in control—whatever it may take.

That’s what I told myself as I walked up the path to his front door. But he wasn’t like the usual people who hired me to take care of their housework—busy professionals who didn’t have time to run a Dyson over the carpets or load their own washing machine. James worked from home as a web designer—a job that made my eyes glaze over when he’d tried to explain what it actually involved—which meant he’d be there while I cleaned.

As I waited for him to answer the door, I tugged at the too-short hem of my skirt. I hadn’t felt the need to dress up before meeting other prospective customers but something about James’ phone manner had compelled me to put on the one suit I owned and run straightening irons through my unruly, shoulder-length blonde hair. On the phone, he’d come across as a man not inclined to waste time with idle chitchat. He’d cut straight to the point, discussing the number of days a week he’d need me to clean and the rate he’d be prepared to pay.

Everyone else who’d hired me was happy enough for me to turn up once a week and give the place a thorough top-to-toe scouring. James would require my services on Mondays, Wednesdays and Fridays. I couldn’t believe his house needed that much attention but I wasn’t going to argue with him. If I landed the job, I’d be able to move a step closer to my goal of running my own company. I could employ someone to take over from me at a couple of properties, maybe even start advertising for more staff on recruitment websites…

When the door opened, I was going through a mental list of all the paperwork that would be involved in expanding my business. With an effort, I snapped my attention back to the man who stood in the doorway.

The only picture I’d seen of James Monroe was the passport photo-style head-and-shoulders shot on his website. It didn’t do justice to the blueness of his eyes, his pouting lower lip or the firm set of his jaw. Frankly, he was hot.

Even casually dressed in a striped rugby shirt and jeans, James radiated a brisk, no-nonsense attitude. I suspected he didn’t have much patience with time-wasters.

I put out my hand for him to shake, hoping an unwanted attack of nerves hadn’t made my palm clammy. Suddenly, I was desperate to impress this man.

Our skin touched and an electric thrill shot through me. From the slight parting of his lips and the surprised expression that crossed his face, I knew he’d felt it, too.

“Well, you’re on time, at any rate,” he said, as though he was ticking off items on some unseen inventory. “Come in, and I’ll talk you through what would need to be done.”

He spoke with the expectation that his order would be obeyed.

I’ve seen guys like you before. You like to hold court in fetish clubs, confident that people are hanging on your every word, and you always have a willing little sub kneeling at your feet, ready to perform whatever task you require.

This was a quick cat and mouse game that was a fun read! Both are determined to “win”. The battle was engaging and so were the characters. This was the first book by Elizabeth Coldwell that I hav...

Share what you thought about Beyond His Control and earn reward points.