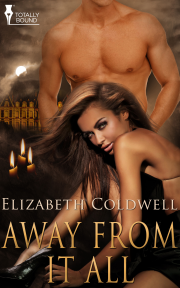 Away From It All

Alyssa's tired of playing by the rules, but when she meets Drew, she's bound to obey him…

When the promotion Alyssa Morton worked so hard for goes to someone else, her friend, Kay, books them both into an exclusive spa for some serious pampering. Kay falls ill on the eve of the trip and Alyssa, tired of playing by the rules, decides to go on her own. The spa's policy is to seat single guests at the same table, and she finds herself sharing her evening meal with handsome American actor, Drew Jefferies.

Drew recognises in Alyssa a submissive streak she's never dared explore, and in the luxurious surroundings of the spa, free from distractions, he vows to teach her what it means to be dominated. He offers her a chance to give up responsibility, if only for a little while, and surrender to a loving, masterful man. By taking her into subspace, Drew offers her a whole new way to get away from it all. But can this ever be more than just a three-day fling?

Reader Advisory: This story contains candle play and has been previously released as part of the Subspace anthology by Total-E-Bound

Share what you thought about Away From It All and earn reward points.