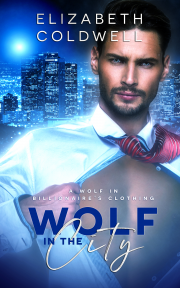 Wolf in the City

She’s about to fall in love with the real wolf of Wall Street.

Elliot Parata is an alpha wolf without a pack, after his was wiped out by an earthquake. Trying to get over his loss, he moved from New Zealand to New York and founded the Wuhuri Corporation, making billions through the creation of payment systems software. He tries to keep his life as private as possible, even though the press wants to know everything about this handsome billionaire, knowing if the secret of his true nature were ever revealed it would destroy him.

Aimee Bright is a diner waitress with a failed marriage behind her—the last woman a lone wolf might be expected to fall for, but when Elliot literally runs into Aimee in the street, the attraction is too strong for them to ignore. Soon, they are falling in love, but when an idyllic weekend getaway ends with Aimee catching Elliot mid-shift, the truth brings everything they had crashing down.

When things go from bad to potentially deadly for Elliot, will Aimee be able to overcome her fears and fight to save him?

Sundown. The moment when everything begins to change.

Elliot Parata gazed out of his office window at the majesty of the early evening skyline. Imposing concrete and steel buildings rose high into the sky, their windows a solid wall of glass reflecting the setting sun in vivid shades of purple and gold. The faint outline of the moon was already visible, its power calling to him in a way he tried his hardest to deny.

In less than an hour, it would be dark, and his transformation would be almost impossible to resist. He needed to be somewhere else, somewhere he could run free, breathing in the scent of the small woodland creatures that scurried away in fear from him. He thought with longing of his cabin in upstate New York, remote and secluded, surrounded by acres of pine forest. He should be there, not in these crowded city streets, so inhospitable to his kind.

No, I should be back on the South Island, back where I belong. If only…

He took a sip of the coffee his PA had brought him a few minutes before and wondered again how he’d become trapped in this corporate prison of his own making. It had all seemed so simple when he’d come here, seeking to put the memories of that terrible night behind him. A chance to start over, to try to forget. He’d never dreamed he’d find himself so at home in such an alien environment. But they said business was a dog-eat-dog world, and what was a wolf after all but the dog with the sharpest teeth and most ruthless instincts?

Elliot’s thoughts flashed back, as they so often did, to the earthquake. The tremor had been felt the length of the South Island, but it had centered on Rockingham, the pinprick of a town where Elliot and his pack had made their home. If he closed his eyes, he could still see the ruined houses now, hear the cries as people begged in vain to be rescued from beneath the rubble. Everyone he loved, everyone he had sworn to care for and protect as pack alpha, taken from him in the cruelest fashion. Driven by grief, by the guilt of surviving when his entire family had perished, he had fled halfway around the world in an attempt to escape the memories. But time and distance gave him no respite. They haunted his sleep, crept into his mind at the most inopportune moments, refused to give him peace.

A chime from his computer, signaling the arrival of a new email, took him back to his desk. When he clicked on his inbox, he saw the message was from Miles McNair and deleted it without reading past the subject line.

McNair produced The Word on Wall Street, a video blog dealing with the activities of the financial market. Despite its scurrilous, gossipy tone, the vlog was immensely popular, and the stories it broke were often picked up by the mainstream press. Ever since the Wuhuri Corporation had first been listed on the New York Stock Exchange, McNair had been chasing Elliot for an interview. Elliot had gained a reputation for going out of his way to avoid publicity. He made sure if he attended a high-profile event, he was never photographed, and he most certainly never gave interviews. McNair had taken that as a challenge, contacting him at least three times a week and begging him to speak to The Word on Wall Street. After the first few polite refusals, Elliot had simply stopped responding to his messages, but McNair clearly couldn’t take no for an answer.

Elliot sighed and scrubbed his hands over his face, dismissing the pushy vlogger from his thoughts. He had to get out of the office. An hour spent pounding the treadmill in his home gym would take the edge off his need to hunt. He pressed the intercom on his desk.

“Sally, I’m going to take off now,” he informed his PA. “If anyone calls, I’ll deal with it on Monday, okay?”

“Of course, sir. And I’ll make sure not to forward any emails.”

He drained the last of his coffee, wrinkling his nose. He’d give anything for a good cup of tea, but no one in this godforsaken city seemed capable of making one. Elliot powered down his computer, stuffed his cell phone into his jacket pocket and left the office.

The ride in his private elevator down to the lobby passed in the blink of an eye. The second the doors opened he was on his way out of the building, though he made sure to acknowledge the security guard who wished him a good evening as he passed. Everyone who worked for this company mattered to Elliot, no matter how menial their role. In some ways, he supposed, they’d become his surrogate pack. But he’d trade all his success, all his wealth in a heartbeat if he thought it could bring back the family he’d lost.

He stepped out of the revolving entrance door. Head down, hands thrust deep in his pockets, wrapped up in his gloomy musings, he didn’t notice the woman clutching the takeout cup of coffee until he collided with her.

Share what you thought about Wolf in the City and earn reward points.