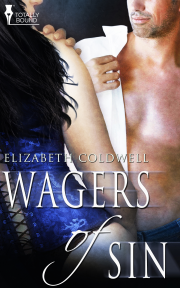 Selina will never be a true dominant until she learns to submit…and Marcus bets he can show her how.

When the horse takes first place, Selina's world is turned upside down. Mistress becomes servant, as Marcus puts her through her paces, issuing instructions she's forced to obey and making her endure the most public of punishments. But Selina can't deny she loves the feeling of submitting to her gorgeous friend, even as he tests her to her limits. She might have lost the bet, but has she won the love of a true master?

Share what you thought about Wagers of Sin and earn reward points.

Hi, and thanks very much for letting me talk about myself and my work on your fabulous blog.

I suppose I could be classed as a veteran when it comes to writing hot and steamy fiction. My first stories were published in the pages of Forum magazine when I first started working there in the late 1980s.