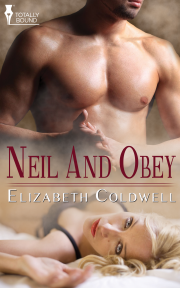 When Liz Webster receives an invitation to her ex-boyfriend's wedding, she needs a date to take with her. Neil Stafford seems to fit the bill. He's handsome, intelligent — and very dominant. He agrees to accompany her, as long as she obeys his every instruction for the whole weekend. Liz is soon plunged into a scenario where underwear is forbidden and sex in public a distinct possibility. Introduced to bondage and an unexpected threesome, Liz gives full rein to the submissive side of her personality. But playing these games for a weekend is one thing. What would it mean to become Neil's full-time slave?

She scanned the wording again, not quite able to believe it. James was getting married, less than eight months after the two of them had split up. She’d kept on friendly terms with him after they’d gone their separate ways, so she knew he was seeing some girl he had met at a conference, but he’d never given the impression the relationship was particularly serious. There had certainly never been any talk of engagement and wedding bells.

He’d always told her he didn’t want to settle down. Now she realised he just hadn’t wanted to settle down with her. And while she’d been sure, deep down, that James would find happiness with someone else, she hadn’t expected it to happen quite so quickly. For a moment, she considered dashing off a reply to tell the Burneys she was sorry, but she wouldn’t be able to attend. Thinking about it a little longer, she had to admit she was actually curious to see the woman who had captured James’ heart in a way she’d never managed.

Her eyes were drawn again to the word, “guest,” on the invitation. If only she had someone to accompany her. The truth was, she’d barely been on a date since her break-up with James. She had thrown herself into her demanding job as the press officer for a small charity, which helped London’s rough sleepers, telling herself that when the time was right she would start looking for love once more. Petty as it might be, she simply didn’t want James to feel he had succeeded in meeting someone else where she had failed.

Liz propped the invitation on the mantelpiece, in a spot that had once been occupied by a photo of herself and James on the beach at Brighton. It had been her favourite snap of the two of them, taken not long after they’d started dating. How long ago that seemed now.

She had a week before she needed to send a reply. If only a hot, available man could wander into her life before then, everything would be perfect.

“So you see, Tina, I really need to find someone I can take along. Preferably someone cuter than James. I know it sounds childish, but I really don’t mind him being happy. I just wanted to be happy first.”

Liz took a slurp of her orange and banana smoothie. She and Tina were sitting in the cafè they visited every lunchtime. Tina, as she always did, was eyeing the arse of the dark-eyed young man who took their orders and brought their food to the table.

“Maybe I can help you there,” Tina replied. “How about Neil? He’s available.”

Share what you thought about Neil and Obey and earn reward points.