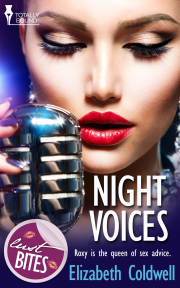 Roxy is the queen of sex advice—can she work her magic on the man who needs her the most?

Laurie Macari is no longer the hottest thing on radio. His phone-in programme, Late Night with Laurie, is falling in the ratings and he’s in danger of being shunted off to the graveyard shift. Dr Roxy Rose is the American sex therapist whose provocative advice and sultry voice are exactly what Laurie’s boss reckons is needed to spice up his show.

At first, Laurie resents Dr Roxy muscling in on his airtime, but sparks fly between them, on-air and off. The more time they spend in the cramped studio, the more Laurie comes to realise the sex life that can benefit most from Dr Roxy’s magic is his own. Together they play ever more kinky games, as bratty Roxy submits to Laurie’s dominant demands, but what will Roxy’s ultimate reward be on the night of the big radio awards ceremony?

“Face it, Laurie, the show’s dying on its arse.”

Laurie Macari sighed, and set his coffee mug, which bore a likeness of his face and the Late Night with Laurie logo, down on the desk. When he’d been called into Don’s office for ‘a little chat’, he’d been expecting the usual backslapping and praise for his show, not this almost forensic dissection of where he was going wrong.

“The figures don’t lie. Your ratings are down forty per cent since this time last year, and the focus groups are telling us that Late Night with Laurie sounds tired and dated. Okay, so you used to be the hottest thing on the airwaves, we all know that, but those days are long gone.”

If they’d reached the stage of delivering home truths, Laurie could quite easily point out that Don Bolton needed to lose a good twenty pounds and do something about the dandruff that flecked the shoulders of his Ramones T-shirt, but kept his mouth shut. As station manager of London Sound, the man’s main concern was doing whatever was best for the business, which didn’t necessarily take the feelings of his roster of presenters into account.

“Be honest,” Don continued. “When was the last time you broadcast something that everyone was talking about the next morning?”

Laurie racked his brain for a moment then a triumphant grin spread across his face. “When I had Aimee Caine from Sweet Lies in the studio. She played a couple of tracks from their new album, and I got her to talk about the rumours that she and her husband are into threesomes. The switchboard really lit up that night.”

“Yeah, that’s true. But that was five months ago. Five months! I never wanted to have to say this to you, Laurie, but your show has turned into something that just hangs around in the room, like wallpaper. You’re background noise for cocoa drinkers.” Don leant back in his chair and laced his fingers together behind his head, a contemplative look on his face. “Martina Swift goes on maternity leave in a month’s time.”

Martina’s show followed Laurie’s each night, occupying what was known at the station as the ‘graveyard slot’, from one until six in the morning. “If your ratings don’t improve, then I’ve got no choice but to move you into her time slot.”

“Oh come on, Don. You’ve got to be kidding…” Seeing no softening in his boss’s expression, Laurie asked, “So what are you expecting me to do to turn this round?”

“I’ve been thinking about this for a while, and you need to do something that will make you stand out from the competition. I mean, take the late-night show on City FM. They have that guy who does the prank phone calls. I listened to him the other night. He rang up an Indian restaurant pretending to be David Beckham and tried to get them to deliver a takeaway to his place in LA. It was hilarious.”

Laurie sighed. “If you expect me to resort to juvenile behaviour like that, you might as well ship me out to the graveyard slot now, because I’m not doing it.”

“Relax, I know that’s not your style. You’re always at your best when you’re covering provocative topics, something juicy your callers can really get their teeth into. And what’s more provocative than sex? So, starting from this Thursday, you’ll be sharing the final hour of your show every week with your new co-presenter, Dr Roxanne Rose, and she’ll be giving sex advice to your listeners.”

Wow!  I swear I could feel the emotions come through my reader as I watched Laurie and Roxy find their balance and passion while turning up the ratings in their night talk show. By the end of th...

Share what you thought about Night Voices and earn reward points.

If there’s one thing guaranteed to have me hooked on a romance story, it’s an ongoing battle of wills between hero and heroine. There’s no doubt that both of them desire each other like crazy, but they loudly declare to anyone who’ll listen that the last thing they want is to be in a relationship. They express their feelings for each other by means of sharp, snappy dialogue, constantly trying to have the upper hand and the last word in any conversation.

• White Palace by Glenn Savan. This is just a perfect "odd couple" romance. The relationship between a young, uptight Jewish widower and a burger waitress from the wrong side of the tracks may seem unlikely, but you're rooting for them to make it work — and the sex scenes are surprisingly hot for a mainstream novel.