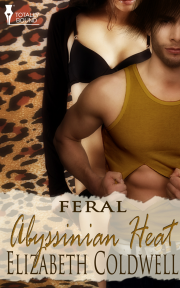 Miranda thought Tadhg was only her pet, but he turned out to be the man of her dreams…

Looking for a new pet, Miranda is instinctively drawn to Abyssinian kitten Tadhg. He's inquisitive, intelligent and the perfect companion — and he's also a shifter, of regal blood.

When Miranda wakes to find him lying in bed beside her in his human form, it's the start of a passionate love affair. But Miranda's ex, Finn, is also a shifter, and Tadhg's sworn enemy. Tadhg knows Finn is prepared to destroy both him and Miranda in his pursuit of power.

There is room for only one cat on this territory, and Tadhg must battle with Finn to claim Miranda's hand and heart.

I thought this was a fab read...hot men and hotter sex!...It's beautifully written and despite the supernatural element, it still felt very true to life. Recommended.

Share what you thought about Abyssinian Heat and earn reward points.