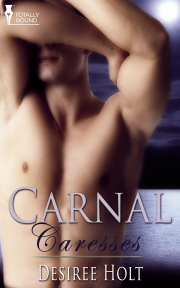 Publisher's Note: This story was released as part of the Night of the Senses Anthology by Totally Bound Publishing.

Bree Sullivan drove through the wrought iron gates with the five and the S entwined in the centre and headed up the long curving driveway. The gates swished closed behind her, locking with a clang that while soft was definite and unmistakable in its message. She was in. Getting out would depend on her host.

She stopped in front of wide stone steps at the top of the driveway’s arc, where a tall, good-looking young man waited for her in precisely tailored black slacks and white silk shirt. Was it him? Was he the one? But when he opened her door and stood politely aside for her to exit, she realised he was just the valet, sent to tuck away her car somewhere.

“Good evening, Miss Sullivan.” His voice was quiet and well-modulated. “Jennifer is waiting for you at the door.”

As she mounted the wide steps, hearing her car being driven away, the broad, heavy oak door opened and an exotic-looking woman in a long strapless gown stood facing her.

“Welcome, Miss Sullivan.” She had a slight accent that Bree couldn’t place. “Welcome to the House of Five Senses. We hope you enjoy your evening.”

She stood in a high-ceilinged reception area with polished wood flooring and an Oriental rug that she was sure cost more than her condo. Another woman stood next to Jennifer, holding a tray with several squares of material. Bree took in a breath to centre herself.

She’d done it on the spur of the moment, caught up in the glamour, excitement and adrenaline of the charity auction. And of course egged on by her closest friend, Cilla the wild child.

”I’m sure you all let your imaginations run away with you,” Bree giggled, “just like you always do.”

“Oh, no.” Cilla leaned closer. “I have it on good authority—and I don’t dare say whose—that absolutely everything and anything goes. You pick which of the senses you want to focus on and everything is geared towards that. There are no limits.”

Cilla jabbed her with her elbow when the next bid went up. “Put some spice in your life, kiddo. Have a once in a lifetime sexual experience. Things you’d never decide to do on your own. Go on, wave your little bidding paddle.”

And so she’d done it.

This is not a traditional romance of boy meets girl, boy wins girl. However, I'm a shameless fan of Desiree Holt and loved the writing even with its nontraditional presentation and will of course; continue...

The experience was well written and interesting...a nice way to start a weekend with your significant as it gives you lots of ideas to try!

Share what you thought about Carnal Caresses and earn reward points.