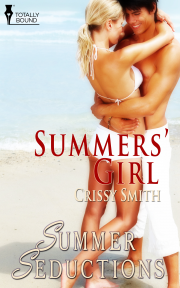 The summer heat isn't the only thing causing Hannah Wagner's temperature to soar—half-naked carpenter Jake Summers is doing more than his part.

Hannah Wagner needs a place to relax and escape everyday life - and the summer home of her childhood fits the bill. She's shocked and a little uneasy by the instant sexual attraction she finds with the carpenter who is renovating the house. Hannah fights her attraction to Jake Summers, but when she finds him skinny dipping in the lake behind her house, it only adds fuel to the fire inside her.

But Hannah is not only looking for a break from her life, she is running from a troubled past and a dangerous ex-husband. When Hannah's ex shows up and threatens her, Jake calls in his old Special Forces team to help. He is determined to bring the man down…and cement the fact that Hannah is Jake Summers' girl.

Hannah Wagner drove up the winding road that led to the old vacation house where she had spent her childhood summers. She’d been so relieved when she called the realtor’s office and found it vacant for the summer.

The realtor had explained to her that renovations were nearly done, but it wasn’t ready to rent yet. Since the inside was mostly complete, Hannah had convinced her that she wouldn’t mind the construction being done on the outside. The realtor had rented it to her for a steal.

Hannah could barely contain her excitement as she prepared herself for the house coming into view. As she turned the corner, her foot automatically slammed on the brakes and she sat in the middle of the road with her mouth open.

The house looked terrible. The shutters sat crooked on the windows, the front lawn was overgrown with weeds, and the front porch looked like it was ready to cave in.

After several minutes, she was able to regain her composure and slowly pull the car to the driveway. Luckily, it was cleared enough to give her room to park the vehicle up in front of the house.

“My goodness,” she whispered from inside the comfortable interior of her car.

Hannah turned off the engine and opened the door. The stifling summer heat surrounded her, and she could feel the sweat start to bead on her forehead in only seconds. It was going to be terribly hot this summer.

She made her way around the house, following a small path of mowed grass to the back yard. A man was bent over a large green lawnmower, shaking his head.

Hannah could tell he was trying to tame the overgrown wreck that had once been her favourite place to sit and read. She hoped he would get it done soon. She had stocked up on books for her getaway.

Seeing the man's attention was otherwise occupied, she took a good look. From what she could tell, he was around her age. The strong muscles of his back rippled as he struggled to get the machine working. She sighed and decided look at the inside of the house. It had to be better than the outside. She couldn’t go back home. She had to stay. She walked up the back stairs saying a silent prayer. If it was liveable, or nearly so, she would make do.

A wave of relief washed over her when she opened the back door to the kitchen and saw it was completely intact. The cabinets had been sanded and stained, the tiles replaced, and the walls had a new layer of paint, but it still felt like a piece of home from her past.

Every night her mother would spend hours cooking, baking, cleaning, and Hannah could remember sitting at the table watching.

Hannah ran her hand over the old oak table. Yes, this was exactly what she needed. Her spirits higher, she moved quickly through the living room, dining room, family room, before making her way up the stairs.

The banister to the staircase had also been sanded and repaired, but it didn’t take away the memories of her sliding down it with her brother chasing her. Tears pricked her eyes even as she laughed at the memories. She went directly to the room that had always been hers.

The walls that once held old peeling wallpaper where now painted a soft blue. The room still had a soft touch to it, and Hannah took a deep breath, remembering the time she had spent inside. This was the room she would stay in.

She went to the master bedroom next.

The memory of her parents asleep in the large bed had the tears that had stayed pooled in her eyes falling. They had been gone a long time now. Nearly ten years. But the car crash that took not only her parents but her brother as well was still fresh in her mind.

She rubbed the back of her hand over her eyes and went to check the last bedroom. The room that had been her brother David’s. Its door was the only one closed. Hannah opened it slowly and her heart sank and the sight of the empty room. There were still paint cans on the floor, brushes and rollers piled, and the window was covered. Unlike the others, this room held no furniture.

Doesn’t matter, she told herself, walking further into the room. The picture of her younger brother splayed over the bedspread came clearly. The floor would be covered with cars and trucks. Her father was always yelling about stepping on them.

Hannah turned in a circle, her eyes closed, trying to picture more of the room.

Hannah heard the order too late to avoid tripping over a paint can. Strong arms circled around her and kept her from falling to the ground.

As she looked up, her breath whooshed out as she saw the most handsome face she’d ever seen. The clear green eyes were full of amusement as the man helped her stand straight.

“Oh my,” she whispered, her gaze locked with his.

Share what you thought about Summers' Girl and earn reward points.