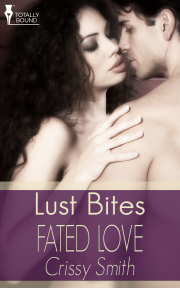 Sometimes Fate brings two people together—but it's just up to them if they let their hearts rule or give into their fears.

Marcus finally makes it back home after the worst case of his career. He's looking forward to some quiet down time until he senses someone trespassing on his territory. The woman who has learned about his special gift and doesn't seem afraid of his wolf is baffling and intoxicating at the same time. Marcus is just unsure whether she means harm or way too much good.

Crystal knew the moment she stepped into the swamp and on Marcus's territory she was where she belonged. Coming from a long line of special women herself, she has no problems with Marcus's differences. If she could just convince Marcus she is his mate, everything will just be perfect.

When these two come together, the heat and passion fills the room and nearly combusts. Almost perfect… except for the vision of Marcus being killed. Can they work together to figure out who is after Marcus? Or will their Fated Love burn them?

Reader Advisory: This book is a sequel to Savage Love although it can be read as a stand alone title.

More than an hour later Marcus stalked between the thick trees to spy on the woman who waited for him. He remained in wolf form so he could move silently and not alert her to his presence.

A few yards ahead, she sat on the thick green ground singing to herself. Her low husky voice sent shivers through his body and made him want to turn into a man. Marcus fought the call of her and moved into a better position.

Her head turned to the side even though he knew she couldn’t have heard him.

“I know you’re there, wolf,” she called out to him.

I was not given the honor of reading the first story Savage Love but if it was anything like this one I am sure it was a goodie worth me going back to look at especially if it has as many hot romance...

Share what you thought about Fated Love and earn reward points.