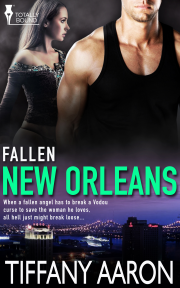 Book 3 in the Fallen series

Reader Advisory: This book was previously released under a different title. It's the third in a series and should be read in order.

The hustle and noise of the French Quarter disappeared as Dominic LaFontaine stood on the sidewalk outside Ryder’s Bookstore. He stared through the plate glass window at the dark-haired woman standing behind the counter. It had been a long two weeks away from New Orleans, but it wasn’t the city that had called him home. It was Teresa Ryder, the woman he called his best friend and the one his heart called his love.

She glanced up at that moment and caught him staring at her. A joyous smile broke across her face and she waved him in. It was embarrassing how his heart jumped at the sight of her racing across the floor to him, and scary how at home he felt when she wrapped her arms around him and her laughter filled his ears.

Crushing her tight to him, he whispered, "God, I’ve missed you."

She pulled back from him, her violet eyes sparkling with happiness. "It’s only been two weeks, Dominic."

"A minute away from you feels like a lifetime," he stated truthfully.

"Quit your flirting and help me close up." She led him back to the register. "How was your trip?"

"Productive," he murmured as he eyed her bottom. He had to stop himself from reaching out and squeezing those luscious cheeks. Great way to greet her after being gone for two weeks, he thought.

"Did you get all your business taken care of while you were out there? I didn’t know you knew anyone out in Reno." She started counting the till.

"He was more of an acquaintance when I went out there, but I’d like to think we’re friends now." As he started shutting off the lights, he thought about the routine they had established years ago.

"I’m sure you are. Who wouldn’t like you after they met you?" She tucked the last of the money into a bag.

He laughed. Teresa had always seen him as a sweet person. She didn’t know that he was one of the most feared men in New Orleans. He had never told her about his past—he didn’t want to destroy her innocence. "William never does what you would expect him to do, but he’s a good man." He took the cash bag from her and opened the door. "Will you join me for dinner? I’ve missed talking to you."

"His name is Vincent Delacourte. He came into the store the day after you left and we just hit it off. We’ve gone to dinner a few times since then." Her face was glowing with happiness.

"Does he treat you like the lady you are?" Dominic shivered as fear trickled down his spine. Was he too late to confess his love? He didn’t know what he would do if he lost her.

"Yes, he treats me almost as good as you do." She laughed up at him, not seeming to notice that his heart was in danger of being broken.

"That’s good. I don’t think anyone could care about you as much as I do," he said softly. She studied him in puzzlement. "I’m going to the club. Why don’t you bring Delacourte by after dinner?"

"I’ll see if he wants to. If not, I’ll see you tomorrow morning like usual, right?" She gave him a kiss when he nodded.

"I’ll drop this off for you." He waved the cash bag and gestured to the limo waiting at the kerb. "Go enjoy your dinner. Looks like your ride is here."

She waved goodbye and slipped into the car. He wasn’t thrilled to see that no one held the door open for her—where was the respect everyone should show her? He put a black mark against Delacourte in his mind.

"Hey, man, your little hottie’s here," Randy said as he poked his head into Dominic’s office.

"Your hottie’s got a date and it isn’t you, man? That’s shocking." Randy’s voice still held a hint of the islands he came from.

"Shove it," Dominic said nicely. "Take her to our regular table. I’ll be there in a minute."

Randy grinned before heading out. Dominic followed a few minutes later. He was surprised to see Randy standing next to the table he and Teresa usually used. If his friend had been a cat, his back would be up and he’d be spitting. A blond man slightly shorter than Dominic sat next to Teresa. She was flushed from something Delacourte had whispered to her. Dominic clenched his hands in anger when he spied Delacourte slide his hand up her thigh. She pulled away before he got too far.

He tried to stifle the raging jealousy inside him. He couldn’t believe Delacourte would try to grope her, especially in public. He managed to ignore the little voice in his head that said he would do it in a heartbeat, if he had the chance.

I think it worked very well as a stand-alone. With the combination of fallen angels and the lovely city of New Orleans, this book is something I will be recommending.

Share what you thought about New Orleans and earn reward points.