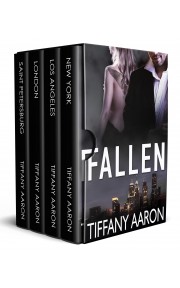 His heart isn’t the only thing Christian might end up losing when he falls for Joan.

Being an Enforcer isn’t helping Christian Vosberg hold on to his compassion for the mortals he’s supposed to protect. He’s going through the motions of living and obeying his orders.

Joan Fisher helps the street people of New York City to give them the same chance that she received all those years ago. She understands how compassion can give someone the strength to hang on until things could get better.

When Christian meets Joan, he doesn’t know that she’s the one who will bring him back from the brink. All he knows is that she is beautiful and caring. He begins to find his own heart again.

But when a debt Joan owes comes due, Christian finds himself in danger of losing more than just his heart.

Nevan Largent has always known angels exist. He just never expected to fall in love with one.

Nevan Largent moves to Los Angeles to get away from the fallen angels he dealt with in Chicago. With his ability to see ghosts and the fact that his cousin has been murdered, Nevan’s life is complicated. Then a blind fallen angel joins the investigation, and he’s sure he’s cursed.

Cassandra Harmen has been blind for centuries, which has given her time to hone her other senses and skills. When she’s asked to consult on a murder case, she meets Nevan Largent. In all her years, she never thought she’d meet a man who teaches her that while she might not be able to see images, she can still see into people’s souls.

Now they have to struggle with love, druid priests and one annoying fallen angel, but their love is strong enough to survive anything…except maybe the fallen angel

Having lost her once, Mika’il doesn’t plan on letting this particular angel get away again.

Mika’il is the most powerful angel in heaven. As an archangel, he has been in charge of the Enforcers who try to keep the fallen in line. But he has a secret that he’s been keeping for hundreds of years. He once fell in love with a woman then lost her. He’s never forgotten Bridget and what she meant to him.

Bridget Langston is a painter and her otherworldly canvases of angels have placed her at the top of the art world. But she’s worried she’s going crazy because she has visions of a man she’s sure she’s never met.

When these two meet, history will repeat itself and Mika’il can complete the task God has given him. But he will also have a choice to make—give up his position in heaven or lose Bridget once and for all. It’s the easiest choice Mika’il has ever made.

The lights of New York shone like small, brilliant diamonds on black velvet. Christian studied the city below him as he stood on the roof of his apartment building. So much had changed over the centuries he’d lived and the city had grown. He remembered being there when the Statue of Liberty had risen above Ellis Island. He was there the day the Twin Towers had been brought down by bad men intent on hurting innocents.

He sipped at his scotch, thinking about Chicago and what had gone on there. Seeing Lucifer face-to-face again had cracked the carefully constructed walls around Christian’s sanity. The worse thing he’d seen was his own downfall reflected in Lucifer’s black eyes. Over the centuries, Christian had seen his own eyes darken from bright blue to midnight blue as he’d began to lose whatever humanity he had.

Sighing, Christian shook his head. Could angels have humanity? Well, he was losing his sympathy for the mortals he lived amongst, and that scared him. He didn’t want to become like the unrepentants he punished. Yet as hard as he fought to not fall over the edge into that abyss, it was becoming a slippery balancing act.

As he contemplated getting another drink, he felt a sudden influx of power, strong enough to almost drive him to his knees. He grimaced, knowing who had just arrived to visit him.

“Would you like a drink, Mika’il?” He didn’t turn to look at the archangel, annoyed that Mika’il felt he could just come and go as he pleased.

“No. I don’t know why any of you insist on drinking when it does nothing to you. You can’t get drunk, so why waste the time?” Mika’il walked up beside him, then sighed. “I don’t know that they’ll ever get used to the new skyline.”

“It’s different, but within a couple of years, no one will think anything of it. Change happens, whether they are prepared for it or not.” Christian held up his glass. “We drink to fit in. It is a very human activity, and we don’t want to stick out amongst the crowd.”

Mika’il pursed his lips, but didn’t look convinced. Christian gritted his teeth, not feeling up to dealing with Mika’il at the moment.

“What do you want?” He tossed the glass into the air, and with a simple wave of his hand, made it disappear.

“Don’t you want to fit in? Doing things like that stands out, Christian,” the angel pointed out.

Christian shrugged. “There’s no one up here to see us. I could run around naked, and no one would care.”

“Heck, you could do that down on the streets, and the single thing that might happen is you’d be propositioned by someone.” Mika’il chuckled. “I have to admit, that’s one of the things I like about this city. Nothing fazes people here. They go on living their lives, no matter what. It’s like they won’t let anything keep them down for long.”

“I can’t come to visit one of my friends?”

Christian rolled his eyes. “You and I haven’t been friends since I fell, plus you don’t visit people for idle chit-chat.”

“Just stop dancing around the subject and tell me what you want, Mika’il. It’s going to piss me off, isn’t it?” Christian clenched his hands then shoved them in the pockets of his pants.

Mika’il shifted like he was unhappy with Christian’s tone. “What makes you say that?”

“You normally just show up, throw me orders then disappear. I’ve never seen you uneasy or uncomfortable about anything.” Christian frowned. “Why didn’t you show up in Chicago?”

“Couldn’t. Had other things to do. Besides, you all had it under control. I knew you could handle Lucifer.” Mika’il rubbed his chin then said, “I need you to check some warehouses on the river. There’s been some activity around the abandoned buildings that I don’t like.”

Christian laughed. “There have been suspicious things happening in them since they were abandoned, Mika’il. Are you going to tell me what has you so uneasy?”

“No. Just go there, and be careful. There have been reports of some unrepentants in the area as well.”

Christian snarled before saying, “There won’t be any when I get done over there.”

Mika’il slapped him on the shoulder. “Which is why I’m sending you instead of one of the lesser Enforcers. These particular fallen seem to be banding together and I don’t like that.”

With that rather cryptic statement, Mika’il disappeared, leaving Christian to wonder how unrepentants had managed to not kill each other long enough to band together. Hell, they usually tried to eliminate other fallen before going after mortals. Christian had never understood why, but Mika’il just said it was like territorial lions. They fought to protect what they consider theirs, which could be anything.

He imagined his bedroom in the penthouse below him, and a flash of power sent him there. Once he’d finished stripping, he strolled into the bathroom. He would take a shower before heading out again. Having just arrived back from Chicago, he hadn’t had time to do anything except get a drink before Mika’il had shown up.

Bracing his hands against the tile of his shower, he let his head drop forward. He hated taking orders from the archangel, yet he knew he couldn’t tell him no. Not after accepting the brand of an Enforcer, and turning into judge and jury against his fellow fallen.

Falling with the others wasn’t the best decision I could’ve made. Christian grunted in annoyance. The secret most of the others didn’t know was that he hadn’t fallen because he’d believed in Daystar’s idiotic babble about being more important than mortals. No. Christian had fallen because he believed in God’s forgiveness, and wanted to prove that God loved his angels enough to forgive their rebellion.