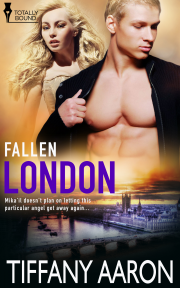 Book 7 in the Fallen series

Having lost her once, Mika’il doesn’t plan on letting this particular angel get away again.

Mika’il is the most powerful angel in heaven. As an archangel, he has been in charge of the Enforcers who try to keep the fallen in line. But he has a secret that he’s been keeping for hundreds of years. He once fell in love with a woman then lost her. He’s never forgotten Bridget and what she meant to him.

Bridget Langston is a painter and her otherworldly canvases of angels have placed her at the top of the art world. But she’s worried she’s going crazy because she has visions of a man she’s sure she’s never met.

When these two meet, history will repeat itself and Mika’il can complete the task God has given him. But he will also have a choice to make—give up his position in heaven or lose Bridget once and for all. It’s the easiest choice Mika’il has ever made.

Mika’il stood on top of the Elizabeth Tower, what most people affectionately called Big Ben. He stared out across the London skyline. It had been centuries since he’d been there last. It might have seemed odd that the head archangel had avoided one certain city in the world, but he had because of the memories strolling the streets.

The ghosts of times past haunted all the cities where mortals lived, but the ones bothering Mika’il were personal. He shoved his hands in the pockets of his pants and continued to study the buildings all around him. Yet he wasn’t seeing the modern, bustling twenty-first century London. No. He saw the city as it had looked two hundred years earlier when the ton had ruled society with vicious gossip, power and money.

“It’s hard to stand here and not see all that has gone on before,” Lucifer spoke beside him.

He’d known the fallen was there, had sensed him the moment he had appeared. Yet he wasn’t given to worrying about Lucifer right then. He was thinking about another fallen and wondering if she still lived in London, or whether her own private demons had driven her away from the city she adored?

“Such deep thoughts, my friend.” Lucifer moved to stand on the very edge of the tower’s cupola. “Why are you here? I’ve never once in close to three hundred years felt your presence in this city. Why come now?”

Taking a deep breath, Mika’il shook off the melancholy threatening to overtake him. “I’m here because Dominic is opening a new club and I want to wish him well on his venture.”

“Hmmm…” Lucifer didn’t believe him, if Mika’il read the nuance of his tone right.

“What are you doing here, Lucifer? I thought you’d be somewhere else, wreaking havoc and causing trouble. Shouldn’t you be anywhere there is strife in the world?” Mika’il raised his eyebrows at Lucifer’s cheeky grin.

“Oh but there is strife and conflict everywhere in the world.” Lucifer waved his hand at the busy streets below them. “Why should I deny myself the comforts of good food and gorgeous women to go to some Third World country when they can kill themselves easily enough without me around?”

As much as Mika’il wished to argue, he couldn’t. Lucifer was right about how mortals were perfectly capable of causing their own troubles without Lucifer egging them on. He faced Lucifer and was stunned at how tired the fallen angel seemed.

Lucifer was paler than usual, and his cheeks were sunken, almost as though he hadn’t been eating, which worried Mika’il. Angels didn’t need to eat and Lucifer shouldn’t look like he was starving.

“Are you okay?” He took a step towards Lucifer.

“What? Are you actually showing concern, Mika’il? How would the Father feel about that? You’re supposed to ignore me and not worry your pretty little head about what I do.” Lucifer dismissed his question with sarcasm. “I’m fine. Just tired of being surrounded by these mortals who blame all their shit on me instead of taking responsibility for their own actions.”

Mika’il winced at the bitterness in the other angel’s tone, which seemed strong this time—as if Lucifer had become less tolerant of mortal foibles. Yet why would Lucifer lose patience with the evil men did to each other when he gained from it?

“Go have fun with your friends, Mika’il. Don’t waste time wondering about me. I’ll be fine. I always am.” Lucifer bowed slightly before he disappeared in a shimmer of power.

“Mika’il, are you coming?” Dominic LaFontine, the Enforcer whose club Mika’il had come to visit, asked.

“I’ll be there in a few minutes. I have something to do first. Don’t hold anything up for my sake.”

“Certainly. We’ll see you when you get here.”

There was no questioning or curiosity in Dominic’s voice and Mika’il realised that no one would ask him about his actions. Well, no one except for Lucifer, and usually that was only because Lucifer knew it annoyed Mika’il when he asked.

Heaving a silent sigh, Mika’il focused his mind on an estate in Northumberland. He closed his eyes and gathered his power, letting it wash over him. The next time he opened his eyes, he found himself standing in the front yard of a large stone house.

Looking around, Mika’il didn’t see anyone, so he strolled towards the entrance of the building and sadness drifted through him. When he’d last been here, two hundred years ago, the asylum had been newly built and the grounds well maintained.

Now the stones had tumbled down and it was in ruins. Nature was reclaiming the area, but in Mika’il’s mind, he saw it the way it used to look. He wandered into what would have been the foyer of the building. Standing in the middle of the entrance, he turned slowly in a circle, seeing the grandeur in the faded, broken walls.

He thought about going up the sweeping staircase to his room, but it didn’t look very sturdy. While falling through it wouldn’t kill him, it would hurt and he didn’t want to have to deal with that. He decided to make his way to the gardens in the back. That was the place that had really touched his heart and made sure that he’d never forget his time there.

Winding his way through the ruins of the estate, he saw flashes of spirits as they appeared then disappeared. Mika’il ignored them as he continued to the wide French doors that led out into the gardens behind the mansion. Amazement washed through him when he saw that the doors were still intact and all the glass as well. Aside from faded paint, the doors looked just the same.

Mika’il almost glanced around to see where the other patients were, but caught himself because there wasn’t anyone there. Taking a deep breath, he pushed open the door then stepped out.

The gardens were overgrown, but he could still see the paths he used to wander with Bridget. As soon as he thought of her, he smiled. There had been sunshine in her laughter and it was something he’d never believed he would find in a place like the hospital had been back then.

“Mika’il, where are you?” Celeste’s voice came through his memories.

“I’ll be there in a few minutes,” he told her and strolled out towards a small clearing.

“All right.” Again there were no more questions or digging into what he was doing.

Where had Bridget gone after she’d left the asylum? He’d checked on her, but for some reason, he hadn’t been able to find her again. He’d asked God to tell him where Bridget had gone, and had been shocked when God had told him he couldn’t.

Author Tiffany Aaron definitely caught me off guard on it and I applaud her for it. I truly believed this would be the last book series but after that unexpected bombshell (and no I w...

Share what you thought about London and earn reward points.