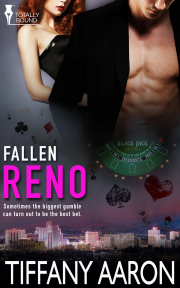 Book 2 in the Fallen series

Sometimes the biggest gamble can turn out to be the best bet.

William Bradford is a Fallen angel and a professional gambler, living in Reno while trying to keep the people who visit there safe from his insane brethren. Something's lurking in the shadows of the city, and William needs all his power to find the truth.

Abigail Hanson deals blackjack, but she hates gamblers, and William Bradford happens to be one of the best. She doesn't understand why she's attracted to him, and why she's willing to overlook his profession.

There's more to William than Abby could ever guess, but when danger comes calling for her, she's glad he's around to keep her safe.

Reader Advisory: This book was previously released at another publisher. It has been revised and re-edited for release by Total-E-Bound. It's the second book in a series, and should be read in order.

William Bradford took a peek at the two cards the dealer had given him. Damn, the queen of hearts and the two of spades. Studying his opponents, he wondered if he should try to bluff his way into the pot or just cut his losses. Maybe if he checked, he would get the chance to catch something on the flop.

He knew he could cheat and read their minds to see what kind of hands they had, though he wasn’t sure he wanted to do that. There was no way of telling what kind of slime lurked in their brains and just because he could read minds didn’t mean he should. There had to be a rule somewhere in the Enforcer code stating ‘Thou Shalt Not Cheat’. One of the men raised the pot. He threw his hand in with disgust then pushed back his chair and climbed to his feet.

"I’m calling it a night, guys." He smiled at the men around the table as he gathered his chips.

"The night is still young. You usually don’t quit until the sun comes up," one of them said, even though William knew they were thrilled to see him leave.

"I flew in early this morning and came right to the tables. I haven’t seen my own bed in a week and I’d like to reacquaint myself with it." He nodded as he left.

Strolling through the Golden Phoenix casino in , William wondered what kind of desperation drove these mortals to gamble away their money and their lives. What flaw was in them that made them long to bet everything on the roll of the dice or the turn of a card? He had seen that moment happen so many times, the moment when the addictive haze cleared and horrified guilt took its place for a while, leaving grown men to weep on street corners with no money and no way to get home.

He used to give them money to help them out before he realised they would go and gamble it away again. Now he did nothing for them. But he was a fallen angel, so maybe he should comfort the most beloved of God’s creatures.

Heading to the bar, he wished he could drown his thoughts—unfortunately whisky didn’t have any effect on him. The bartender recognised him and had his drink ready for him by the time he sat down.

William laughed because, except for that last hand, the cards always fell his way, which explained why he chose to make his living as a poker player. "I’m just tired. I’ve been busy for the last week and need to catch up on my sleep."

Burt looked slightly surprised and William realised those two sentences were the most he had ever spoken to the man. He shrugged. He didn’t like talking to people. The only person he had ever felt the need to spend time with was Celeste, but now that she was attached to that arrogant mortal Adam Montgomery, she didn’t need him anymore. Burt seemed to be a good listener, but then wasn’t being a good listener a requirement to be a bartender? Burt set another whisky on the counter.

"I’m not done with my first," William pointed out.

"It’s not for you." Burt nodded towards the door.

He swung around and felt his lungs deflate as he took in the woman walking towards him.

She was petite, with an hourglass figure he would love to get his hands on. Her amber hair sparkled with burgundy highlights—the colour he’d always envisioned hell fire would be. A black and white bandana kept her hair off a face meant to break a man’s heart. Her big brown eyes reminded him of the richest Swiss chocolate. Her creamy skin was flushed and he could feel the anger rolling off her.

Her green T-shirt filled with lush breasts bared her stomach and he caught a hint of glitter at her belly button. As he ran his eyes down her legs, he imagined them wrapped around his waist as he thrust into her. Sweat beaded on his forehead.

Flinging herself down on the stool next to him, she grabbed the whisky and slammed it back. Burt had another shot ready when she set the glass down.

"Slow up a little, Abby," Burt said as the redhead drank the second one back just as fast as the first.

"I swear if the pay wasn’t so good, I’d blow this fucking job." She ignored William.

"Thompson do it again?"

"Yeah, he grabbed my ass. He can’t believe I’d turn him down. What is it about you gamblers?" Her brown eyes shot knives into William.

He didn’t think she was looking for an answer so he kept quiet. Obviously some guy had groped her and it had pissed her off. Standing, he reached into his pocket to pay his tab.

Abby reached out and grabbed his arm, although she wasn’t sure why she was talking to the man. His bloodshot blue eyes said he hadn’t slept for days. He had all the markings of a professional gambler and was just the kind of man she had always sworn never to get involved with. The hard muscle flexed under her hand as she met his glare.

"I asked you a question."

Burt shook his head and moved down the bar. The stranger raised an eyebrow.

"You did? I thought you were stating a fact. I’m sure you weren’t looking for my opinion." His voice came out smooth and lit a fire in her stomach.

It’s just the whisky. "You’re a professional, always on the lookout for the next game. Do you know the meaning of the word no? Do you force your attentions on women?"

"Darling, no woman I’ve ever wanted has turned me down." He gave her a slow, bone-melting grin.

The dream scenes were smokin hot and I loved them. It paved the way for Abby to lust after William so he could keep her safe from the demons...

Share what you thought about Reno and earn reward points.