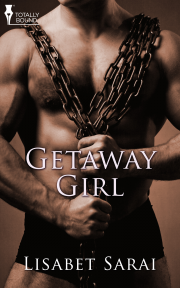 All that Peg wants is a break, a bit of adventure, a relief from her mundane existence in the buccolic but boring Yorkshire hamlet of Kirkby Malzeard. When dashing, sophisticated journalist Lionel Hayes saunters into the pub where she's tending bar, Peg suspects that he was just the sort of man to fulfill her fantasies of escape.

The seductive Lionel, however, is not what he seems. Before she knows it, Peg is a hostage, roped and gagged, speeding away from the scene of a daring crime. Lionel is armed and dangerous, but somehow Peg still wants him—regardless of the consequences.

Publisher's Note: This story was released as part of the Bound Brits Anthology by Totally Bound Publishing.

Be careful what you wish for. Peg’s mum used to tell her that. It was the standard response whenever Peg wandered off into one of her daydreams. You never knew whether you’d really enjoy all those things you craved, riches or fame or adventure. Every dream had its price.

Mothers do have a way of being right. Look at Peg’s situation now.

She lay on a pile of burlap bags scattered over the floor of a commercial van. Her wrists were tied behind her back with grocery twine. Her ankles were bound together in a similar manner. A handkerchief stuffed into her mouth effectively prevented her from making any sound.

Seated opposite her, cross-legged, was a man with a gun.

All she had wanted was to get away from the soporific quaintness of Kirkby Malzeard, just for a while. Some new sights, a bit of fun, some relief from her responsibilities and the boredom of day-to-day village life.

Now look at her, a hostage in the custody of desperate criminals. Trussed up like a turkey under the watch of a gorgeous but obviously dangerous man whose name might or might not be Lionel, whose devilish smile made her insides quiver like pudding, who pretended to be kind but who never for a moment took his eyes off her body or his hand off his revolver.

Peg contracted her arm muscles and discreetly tried to pull her wrists apart. If anything, the loops of twine grew tighter, biting into her flesh.

“I wouldn’t recommend struggling,” said Lionel, his grin broader than ever. “You’ll do yourself damage.”

He seemed to be right, just as Peg’s mum had been.

Peg flopped over onto her side and brought her knees towards her chest, trying to find a more comfortable position. Her skirt rode up around her thighs. The burlap scratched against her bare skin. Lionel’s eyes narrowed at the view, and his breath quickened. He’s turned on, Peg realised. He fancies me. Fear lanced through her. She was a helpless captive. He could do whatever he wanted.

It was strange. The thought was more thrilling than terrifying. Not that he could do much now in any case, with her legs bound together tight, and the two of them lurching back and forth as the van bounced along the country road. Later— well, she would worry about later when it arrived.

The driver grunted. “Haven’t got a clue. Ask her, why don’t you? She’s the native.”

Lionel leaned forward, close enough that Peg could smell his forest-scented after-shave. “If I take out the gag, do you promise not to scream? It wouldn’t do you any good anyway, but the sound of a girl yelling always puts me off.”

The handkerchief seemed clean and Peg could breathe through her nose, but the gag was hardly comfortable. She nodded. Her captor obliged her by removing it and stuffing it back into his breast pocket.

“I can’t really say without knowing where we are, can I? Have we passed the Grewelthorpe crossroads?”

“It was too dark to read the signboard, but there was a four-way junction about two miles back.”

“What about the railway? We should have crossed the rails a mile or so before.”

“Yeah, there was a grade crossing, I think.”

“It should be about two more miles, then. There’ll be a sign on the left for Lawton Dale. Turn there; the lane dead ends at the cottage.”

Despite Peg’s instructions, Jack almost missed the turn. He swung the van wildly at the last minute, tossing his passengers around in the back. Peg’s body was thrown almost into Lionel’s lap.

Her cheek brushed the fine wool of his slacks, a relief after the harsh burlap. She came to rest with her face at the same level as his crotch. She could see evidence of the effect she had on him. The fabric formed a distinct peak at his groin. She could see the gun, too, where he had dropped it when the van swerved, but what could she do? With her hands and feet tied, she was crippled.

It gets very hot and steamy! It is hard to tell if the captor or the captive is in charge! I really enjoyed this book. I would recommend this to everyone for a fun, quick read.

Share what you thought about Getaway Girl and earn reward points.