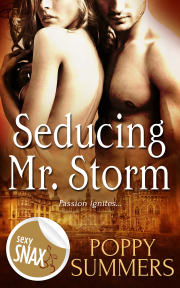 In the late 1700s, Susanna Seymour’s mother is very keen to find a husband for her younger sister, Lucy, while Susanna is considered on the shelf at twenty-seven. Enter their neighbor arrived from London, the dashing and irreverent Elijah Storm, who makes his admiration for Susanna plain from the start. Susanna is not looking for a husband and is keen to make sure Lucy wins the bachelor, but things don’t go quite to plan. Elijah is frank in his desire to have Susanna’s sexual services, and she believes by giving him what he wants, he will lose all interest in her. Her price is his agreement to marry her sister. But when passion ignites, what will happen when Susanna seduces Mr. Storm?

Publisher's Note: This book has previously been released elsewhere. It has been re-edited for re-release with Totally Bound Publishing.

Susanna Seymour stared out at the magpies and sparrows feeding on the crumbs of bread scattered over the lawn and wished she was outside with the birds. It was a glorious spring morning, blue sky chasing away the ragged clouds of last night’s storm, green as far as the eye could see from the edges of the Seymour estate and into the wilds of the Yorkshire moors. Susanna often dreamed of clambering around the rocks and hiding in the long grass, buffeted by the wind and the rain, pursued by nature’s elements. Ever since she had left her teens, her parents had deemed her too old to play on the moors, too old since she reached the age of twenty-seven to ever be married, firmly on the shelf and cast in the spinster role while they instead looked for a husband for twenty-one-year-old Lucy.

It wasn’t that there hadn’t been offers for Susanna’s hand before, but she had turned them all down flat. It served her right for reading too many novels and thinking her own romantic hero might be out there somewhere. It had got her nowhere other than confined to her parents’ house for the rest of her life.

Lucy’s prospective suitor, their new neighbor at Rainton Grange, would call today to pay his respects. Having already asked around, Elizabeth Seymour knew he had an income of twenty thousand pounds a year and was well thought of in his usual circles in London. The Grange was somewhere to holiday for the rakish bachelor, and Mrs. Seymour was keen to hook him for Lucy without preamble. All she had talked about in the six days since he had written to accept their lunch invitation was the rumor that the exotically named Elijah Storm was as arresting as his moniker.

Susanna couldn’t care less. Mr. Storm could go right to hell for all she gave a damn. She was sick of meeting Lucy’s suitors and sick of having people look at her in pity for missing her chance. In all reality, she wasn’t sure she cared about having a man. What did it matter when men such as those in the novels didn’t exist anyway?

A commotion in the hall signaled the arrival of their guest, Lucy’s little dog, Toby, yapping excitedly. Her mother gathered up her skirts and fled to a chair, arranging herself with deliberate boredom, as though she had not just spent the last two hours gazing from the window in anticipation.

Susanna lingered apathetically behind, prepared to be little more than disdainful toward whichever fop stepped through the door. The door opened, Richard bowed and announced loudly, “Mr. Elijah Storm,” and Susanna’s knees almost buckled as an angel fallen from heaven entered their parlor.

He was perhaps in his late thirties and tall, almost a head taller than her father at about six feet, and so well made! He wore a black suit with white linen, the lace at his throat and cuffs understated and neat. His body almost strained the velvet of his frock coat and breeches, his shoulders broad, his thighs strong and…

Poppy Summers is the straight side of multi-published M/M author, Scarlet Blackwell. She likes heroes in tight breeches with a dash of Heathcliff and Mr. Darcy about them and feisty heroines who know what they want. She also likes polar bears and cheese, but not necessarily together.

You can take a look a Poppy's website here.

Share what you thought about Seducing Mr. Storm and earn reward points.

My obsession with period novels started when I read Wuthering Heights at aged thirteen. Heathcliff was the anti-hero - dark, smouldering, sexy and so, so bad. He wanted Cathy with a passionate abandon that took over his entire life.