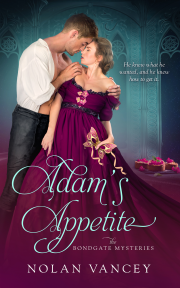 Book 1 in the The Bondgate Mysteries series

He knew what he wanted, and he knew how to get it: but in his search for pleasure, what Adam didn’t know could hurt him...

What a mess! Adam Blythewood’s father hoped that the young rake would be able to avoid temptation at remote Windmere Hall, but he didn’t know about Lady Windmere’s three daughters, or the lusty servant girls for whom Adam’s arrival is a welcome change of pace. However, the more deeply involved Adam gets in the Windmeres’ affairs, the more he is shadowed by mystery: what happened to Roderick Utley, previously all but betrothed to Frederica Windmere? Does it have anything to do with Utley's interest in the renowned Windmere tart and his search for the aphrodisiac herb that the Windmeres' ancestor may have brought to the area? Perhaps the answers lie at Bondgate, the estate of charming but eccentric Pamela Bond; when Adam is invited to one of Miss Bond’s masked revels, he discovers pleasures he never imagined, including a night with “Zerlina,” whose true identity may help solve the mystery of Roderick’s disappearance.

Nolan Vancey loves stories in all forms, be it words, pictures, songs, or scrimshaw. Whether it's Jane Austen or Tales from the Crypt, when he isn't writing his own stories, he can be found reading or watching something new to him. At other times, he is a musician and family man in his home state of Kansas in the United States.

Share what you thought about Adam's Appetite and earn reward points.