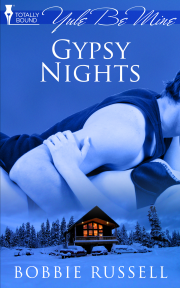 Yule Be Mine collection (Book #4)

With her ex-lover's stinging words reverberating in her brain, Gypsy decides to go to bed with her new neighbour to re-establish her self esteem and finds something more meaningful than a one night stand.

Gypsy Martin had a rough childhood but managed to attend medical school and is now intent on helping those in the community who have nowhere else to turn.

When Jeremy Stone was eleven, his drug-using father beat his mother to death and if not for the intervention of a neighbourhood police officer, Jeremy would have killed his father. Now as a cop, Jeremy is intent on getting the ‘bad guys' off the streets. When Jeremy's one night stand with Gypsy ends up meaning something more for both of them, he sees in her a future he never thought to have.

But that future is threatened when one of the ‘bad guys' Jeremy is after takes Gypsy as a hostage.

It was a dark and stormy night.

Why did that moronic phrase keep running through his brain? Jeremy squinted through the narrow slit in the ski mask. He jerked the hood of his insulated parka over his head for added protection as the snow swirled around him. The forest they were silently trudging through didn’t keep the huge snowflakes from getting through and for the past hour the walk had become increasingly difficult as snow drifted up to his knees.

Probably because it was a shitty, stormy night, he answered his own question just as another popped quickly into his head. Why the fuck had he agreed to help Federal Agents on a night like this? Thomas Franco, the militant leader they were hunting, had last been seen just twenty miles south of Corbin and the Feds figured he had a base camp close by—that was why. Jeremy had sworn to serve and protect and he wasn’t about to let a gun toting, America-bashing bastard like Franco invade his town.

His town. He’d only been in Corbin a week. He wasn’t sure you could call the small collection of antique stores, one grocery and a diner a town, but compared to Chicago, the community of only a thousand people had been just what he needed.

“Did you see that?” Sam’s question came quietly through his earpiece. The group of a dozen or more Federal Agents were fanned out through the forest, but his deputy, Sam Higgins, had remained close by.

The infrared goggles he wore, while helping him see in the dark, often created shadows where there were none. Jeremy turned his head but his hood blocked his view. He jerked it back just in time to see the hazy outline of a man lunge at him, a knife held high. As it sliced downward Jeremy twisted out of the way but he wasn’t fast enough.

White-hot pain ripped across his shoulder. “Fucking bastard.” He staggered but before he could catch his balance and shoot, something slammed into the back of his head and the world went black.

Share what you thought about Gypsy Nights and earn reward points.