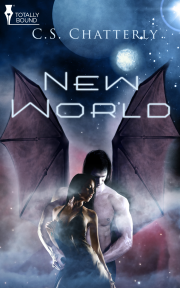 Humans mate with extraterrestrials in an effort to repopulate the planet Earth.

When Zane Orros arrives on Earth from deep space, his only motivation is to live a peaceful life, away from the war-torn part of the universe. As a weary defender of the decimated world of Dacor, he agrees to a contract marriage with an Earth woman; on Earth anything is possible, even a brand new life with an exquisite new mate.

Falon March is one of many Earthlings who have elected to take an extraterrestrial to her bed. In Zane's arms, she finds all the passion and warmth a woman could ever desire.

But the war still raging in other parts of the universe is headed towards Earth. Enemies from the stars look to the Milky Way and its resources with covetous eyes. And when these insidious raiders strike, no one is safe. Zane and Falon's torrid relationship might end at any time, all with the blast of laser cannon.

This book contains M/M sex scenes and a M/M/F scene.

The year, 3033 In what was once referred to as Northwest United States

Falon March gazed up into the early autumn sky and marvelled at the wonders of nature. Birds flew there, clouds drifted by and the air was clean. She’d read about people in past generations who’d never thought to breathe air so pure again. But that was all over. Pollution was a travesty of Earth’s ancestors; the population in general no longer felt the need to dump trash over the land or in the oceans. Of course, she reasoned, there wasn’t much of a population left after hundreds of years of warfare. But that was why she was standing outside one of many central arrival areas now located on Earth’s surface. Her business was all about repopulation. At least, it was now.

Every day, Falon realised that new aliens were arriving to replenish her planet’s surface. To many, the , as it was sometimes referred to, was a wondrous arena of luscious plant and animal life. On Earth, beings from all over the cosmos could find a new home, a respite from the tribulations of war and pollution on their own worlds. As sentient creatures often did, she was sadly aware that almost all of them had at one time or another befouled their own planets to the point that existence became impossible. But, just as Earth was renewing its surface, many of their worlds were recovering as well.

There were, however, a few planets and their outlying systems that had pushed the limits of feuding and pollution too far. For their citizens, their homes would never be the same. The lessons of deadly fighting had been hard learned and had come too late for the people of many galaxies. Their eclectic denizens were ready to start their lives over on a planet far away from their destroyed home worlds. For these beings, Earth offered itself as a haven of hope. It now stood as the jewel of all the recovered planets. But Falon, as with all the citizens of Earth, understood just how close to extinction all the plant and animal life had come. Every species on the surface, and beneath it, was now protected by the very humans who’d sought, for centuries, to destroy them. Anyone coming to her world had to promise to protect all creatures, in their smallest forms. In exchange, those lucky enough to travel this far would enjoy a paradise.

“Life is good,” she whispered to herself and felt the cool breeze lift her hair from her shoulders. The cry of birds heading south for the winter was welcoming. She hoped the man she was about to meet would find her world—his new one—just as mesmerising as she. This would be the first time anyone on Earth had seen a Dacorian. Falon was aware of how his appearance at the arrival station would attract attention, but there was simply no other way to greet the man that was shortly to be her new husband. The law declared that all incoming citizens must land at these places. This was to guarantee they carried no diseases or microscopic organisms that could once again put Earth’s recovered eco-systems and its current population in jeopardy. From her oral transmissions with Zane Orros, he seemed perfectly satisfied to abide by the rules of immigration in every way, and wanted to become a model citizen. Falon recalled the first time she’d heard his voice from space. It had captured her attention immediately.

Zane’s warm, baritone transmission had rocked her to the core. He’d been too far away to connect with any video transmission apparatus, and had preferred to remain off such devices when he’d come closer to Earth. She’d attributed his reticence to being seen, as he amusingly proclaimed, to not wan

Indeed, Earth was now an Eden. Even in the autumn of the year, colourful plants grew in profusion around the arrival station. The air was filled with their sweet yet subtle aroma. There wasn’t a home or a corner on any street that wasn’t landscaped to perfection, and didn’t boast at least one colourful basket of seasonal flowers for others to enjoy. The streets were clean, no debris lay anywhere. Earth’s native population had learned their lessons well.

Falon chewed on her lower lip, hoping her new mate would find this world as lovely as she’d described it. A fair amount was known of his planet, including the fact that it was now an unliveable rock. What life had survived there had been rescued and placed on worlds where it was hoped it would thrive. Such was the legacy left of their homes, by so many of these so-called more sentient beings. But she hadn’t heard any disdain in Zane’s voice or rancour over his situation. There was a deep sense of sadness that his world was destroyed for good. Too many centuries of fighting off an insidious alien invasion had seen to that. But he was willing to get on with his existence and view Earth as his new home. There was just one small doubt that now bothered her. It was, as she still tried to convince herself, a very negligible issue. No matter how she attempted to counteract the feeling, she couldn’t help where her thoughts led. She’d tried, over and over, to tell herself she was being superficial for even thinking of it. It wasn’t a trait she found very endearing in her own character, but there it was. In short, she was exceedingly nervous because she didn’t know what the man who was to be her husband looked like. Was he tall, dark and handsome, or was he small and pale like the crustacean men and women of Signus Seven? She swallowed hard and silently prayed that wasn’t the case, and again chastised herself for not viewing her incoming mate in a more cerebral fashion. Besides her trivial misgivings, Earth needed new citizens. She should be considering her duties to her world and think with a more developed part of her brain; some part at least above the level of her crotch. In an effort to alleviate her anxiety, she’d carried out some devilish little snooping. She hadn’t liked the metaphorical taste it left in her mouth, but she’d investigated anyway.

From incoming races, she’d heard descriptions of the Dacorian males, but the images depicted could have all been greatly exaggerated. It was said, from those races familiar with his species and Earth culture, that Dacorians were huge beings that greatly resembled old Earth gargoyles. Some of these gargoyle statues still existed on buildings in old Europe. Though war had all but destroyed ancient monuments, some examples of these architectural wonders were viewable on Falon’s computer. At first, the gargoyles’ appearance was a bit staggering, but she rationalised that any being that could speak English as clearly as Zane couldn’t have a beak or only a semblance of a mouth. Biologically, Earth Immigration physicians had heartily recommended Zane as a viable being for procreation as his internal physiology was almost identical to human men. He wouldn’t have been allowed to become a candidate for citizenship otherwise. Earth needed repopulating and only those species that could breed with existing human citizens were currently being considered for permanent residency. Indeed, part of her agreement and Zane’s was that children should come of their relationship within three years of their mating. He would be allowed to take her surname name or keep his own as part of the bargain, and the children from their coupling could decide on either surname as well.

After all their logical, numerous conversations on these and other matters, Zane simply couldn’t be like one of those roof-clutching creatures called gargoyles. At least, not literally.

Recommended Read! What a fantastic futuristic world. If you are a fan of Sci-Fi/fantasy romance you need to make sure you add New World to your collection.

Share what you thought about New World and earn reward points.