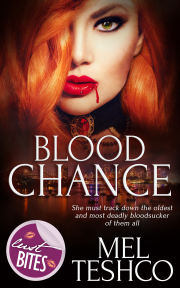 To save her dying mother, Kia must suppress her loathing of everything vampire to track down the oldest and most deadly bloodsucker of them all.

All dhampir Kia Montana has left in the world is her mortal mother, and Kia will do everything in her power to save her mum from dying. She sets off to track down the Ancient One, Sean Maximillus. He is the one and only vampire capable of reversing her mother’s condition.

Instead she finds Ronan, a gorgeous and mysterious man who promises to take her to the Vampire Lord…after he’s taken her to bed. But Ronan seems to know too much about Kia—things she never told him, and she is soon drawn deeper into his world, where he will reveal secrets that will change her life forever.

“It isn’t over between us. Not by a long shot.”

Kia Montana hid a smile as she rolled up her sheer stockings and clipped them to her lace suspenders. Pushing her feet into the high-heel shoes she’d tossed aside so carelessly the night before, she glanced over at the gorgeous man sprawled out on her hotel bed.

Passion emanated from him, scorching and hot. She gave him a cool smile, resisting an impulse to sashay over, lean forward and trace her tongue along the salty warmth of his collarbone, and down over the hardened buds of his dusky nipples.

Even harder to withstand was the urge to sink her fangs into his delectable throat, taste the pulsating warmth of his essence while he brought her to climax once more.

She breathed slow and deep, and his glittering, gunmetal eyes held her gaze when she said, “Sorry, but I don’t do relationships.”

“Don’t apologize,” he drawled. And as she slipped into her crimson lace bra, a savage light sparked deep in his stare. “I know how to change your mind.”

Her nipples, still tingling from his mouth and clever hands, hardened under his scrutiny as she clipped the bra into place. Her pulse jumped, but it was his declaration that kickstarted her heart into high speed.

She inhaled slowly, gaining control. “Oh?” she queried with an Oscar-winning note of boredom.

“You want access to all of Sydney’s underworld places. As your escort, I can offer you that.” He smiled at her silence. “A ticket to where only an exclusive few have been.”

Her heartbeat surged into a frantic gallop as excitement writhed deep inside. When she’d seen him at last night’s shindig, moving through the crème de la crème of the Sydney crowd as if he owned each and every partygoer there, her instincts had clamored.

He held the key.

She kept her face an impassive mask. This could be her one opportunity to get close to Sean Maximillus, the reclusive, centuries-old Vampire Lord.

She managed an idle smirk. “Running short of eager, beautiful young women to parade around?”

A crack of laughter shot from his sexy mouth. “Quite the contrary.” His gorgeous gray-blue eyes drank her in. “Apart from your obvious charms”—he shrugged—“you intrigue me.” He sat up, dark hair tousled. Abs rippled beneath his golden skin while he ran an outstretched hand over a strong jaw already shadowed with growth.

Such masterful hands, she mused. They’d stroked and caressed her in all the right places, until she’d quivered with lust and undulated with pleasure. She forced back the memory and a sudden, feverish ache. It would be all too easy to surrender to another round of his skilled seduction.

“Really?” she asked, arching a brow. “I guess you’re bored with simpering women?”

A muscle jerked along his unyielding jaw. Then he grinned and pushed to his feet before taking a few strides her way. His lifted his hand, using the pad of his thumb to brush beneath her chin. “You’re extraordinary, do you know that?”

Something passed between them, some kind of magnetic pull that held her breathless and still. “You have no idea,” she whispered.

His eyes widened, and he dropped his hand. Spell broken. “You’re so sure of that?”

She looked away, disoriented. Never before had it felt as if all her highly developed senses had short-circuited, leaving her vulnerable. Exposed. She swayed, perversely thankful for his hands that he lifted to frame her hips, steadying her.

Her vision blurred, and she closed her eyes for a second before stepping out of his hold and looking back up. “I never told you my name.”

Hardness lurked beneath the brilliant shimmer of his stare. Without warning, he dropped his head to hers, covering her lips with his in an open-mouthed kiss that jump-started every nerve ending in her body and made her forget, for one moment, her single-minded purpose.

He as quickly pulled back, his expression fierce. “You didn’t need to tell me who you are.”

What? Her blood simmered, her pulse leaping into overdrive. She took a deep breath, then another. When she spoke, her voice came out like frost, “Did you make inquiries before taking me to bed? Checked out my references, perhaps?”

His white teeth glinted amusement, raising her blood to boiling point, clearly deeming her question unworthy of an answer.

His sinewy body looking every inch hard and sleek, he shrugged into his white evening shirt, then pulled up dark briefs and tailored pants over his long, powerful thighs.

No, it was better that he left. She’d never wished for anything above an extraordinary lay and she wasn’t about to start now.

This driving need within was nothing more than her bloodlust twitching hungrily, tempting her to sample him again. Making her crave to have him deep inside her while she lost herself to exquisite, heady bliss.

He laced up his shoes, then straightened. Tall and forbidding, his eyes were now dispassionate as he looked at her. “If you’re interested in my offer, meet me in the motel foyer. Tonight. Eight o’clock sharp.”

Her gypsy-like upbringing saw her living in many places along Australia’s east coast. Each new home stimulated an already over-active imagination, where she spent as much time dreaming about fantasy worlds as the real world – the fantasy sometimes being much better.

Now living on a beautiful rural property with views of the mountains to keep her fat horse, three cats, hyperactive Belgian shepherd and Rotty dogs happy, she is happily married to Mr Patience, and adores her three children and two grandchildren.

Share what you thought about Blood Chance and earn reward points.