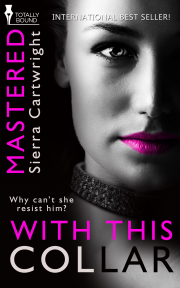 With This Collar PRINT

Book 1 in the Mastered series

Book one in the Mastered Series

Julia Lyle will have nothing to do with domineering men, no matter how tall, dark, and sexy. But Dom Marcus Cavendish will be satisfied with nothing less than collaring the fiercely independent Julia.

Nothing could have shocked her more…

Julia Lyle is invited to her best friend's wedding and is stunned when Lana kneels to accept her husband's collar. When Julia starts to object, firm, relentless hands land on her shoulders. The man behind her threatens to turn her over his knee if she interrupts. She's outraged, but there's no doubt he's serious.

After the ceremony, he offers her a glimpse into her friend's lifestyle, if she's brave enough to accept.

Master Marcus Cavendish is everything she doesn't want in a man—dominant, self-assured and arrogant. So why can't she resist him?

Telling herself that learning about the lifestyle will make her a better friend, Julia agrees to submit to Master Marcus, but only for the evening. Firm and unrelenting in his handling of her, he introduces her to his tawse and the pleasure/pain of a spanking delivered by a competent Dom. The experience unnerves her, making her question everything she thought she knew about relationships, and his forced orgasms leave her shattered.

No doubt the scene seduced her, and that makes her doubly determined to avoid him. She has fought hard for her freedom and vowed only to date nice men, and Master Marcus is anything but safe.

Marcus is undeterred. Julia is a natural sub. The way she responded to his touch, his voice, his punishment proved it. Now he has to convince her to yield to him, submitting to his tawse as she kneels to accept his collar.

"And now, friends, Lana will offer her submission to her new husband," Damien Lowell said.

Lana and Julia had chatted on the phone earlier in the week to discuss the final wedding plans. Lana had warned that the union would be a bit untraditional. She’d been vague about the details, but she’d made Julia promise to say nothing during the ceremony.

They’d been friends since they were ten, and there was no way Julia would miss the festivities, even if they were a bit odd.

Until now, everything had been what she’d expected.

Lana and Ben were being married at their friend Damien’s mountain home. Damien was also performing the ceremony.

About two dozen of the couple’s closest friends had gathered in the great room and, at dusk, Lana had descended the stairs of Damien’s picturesque home, carrying a single, beautiful, white rose to match her full-length gown.

The only gift requested had been a candle. In a romantic gesture, the pair had said they wanted all their friends to light their way into their future.

As Ben and Lana had joined hands and faced Damien, fat snowflakes had fallen from the cloudy sky. The vows had included the word obey, which was somewhat unusual among their circle of friends. But everything else had been normal. Lana had placed her rose on the mantel behind Damien before she and Ben had exchanged rings.

'Sir'? Until tonight, Julia hadn’t met Damien. She knew he was a friend of the groom’s, and he was drop-dead, movie star handsome. The man had rakishly long, dark hair that curled at his nape, and he wore an indefinable air of command as easily as he filled out his charcoal grey suit. But still, for her friend to call him 'Sir'...?

Lana cast her gaze at the floor and gracefully turned her back to her new husband.

Ben undid the row of tiny buttons that held her gown closed.

Ben drew the material from Lana’s shoulders and let the dress fall to the floor.

Lana, wearing stacked heels, a merry widow and stockings, stepped out of the dress, and another man scooped it up and laid it across a chair.

Like Damien, this man was also ridiculously tall. That was where the resemblance ended. This man had an olive complexion that hinted at a Mediterranean background. His head was shaved. He wore black jeans and a black T-shirt that revealed a number of tattoos. A thick, knotted silver bracelet adorned his left wrist, and a silver stud pierced his right earlobe. He could have been a pirate in a former life.

Suddenly unconventional took on a whole new meaning. Julia had never been more distressed. Part of her wanted to make an escape, and a bigger part of her wanted to shake some sense into her friend. But she was riveted in place by her promise to remain silent.

With a grace that spoke of practice, Lana knelt.

Jesus. All through college, they’d each vowed to keep their independence. They’d pushed against the glass ceiling, and they’d fought for their positions in corporate America. And now her friend was kneeling in front of her husband, almost naked, for their guests to see?

Julia wondered if she was the only one who was frozen in shock.

Lana spread her legs a bit farther apart, and she leant forward to kiss one of Ben’s shoes.

From the front of the room, Damien looked over his shoulder at her, his eyebrows raised.

Firm, relentless hands landed on her shoulders. Her heart rate increased with her panic.

"Be quiet," a man whispered harshly into her ear.

She gritted her teeth. The man’s tone was commanding.

He pulled her back a bit, and she inhaled the unmistakable—and sexy—scent of leather.

In that same rich and rough, for-her-ears-only voice, he added, "Or else I’ll haul your sweet ass out of here and turn you over my knee."

For the first time in her life, she was rendered speechless.

"Lana’s doing this of her own choice," he continued.

She struggled against his grip, but he dug his fingers deeper into her flesh.

"Surely she told you to expect some unconventional things."

Share what you thought about With This Collar PRINT and earn reward points.

Sierra Cartwright - Interview for With This Collar

The book is set in a secluded mountainous area, so why did you choose this as a place to have The Den?

When I’m at my home near Denver, I live in a fairly urban area. I can walk to a quaint historic district with shops and restaurants and nightlife. And there’s a bus stop right outside my window. And the local police station isn’t far away. It’s a vibrant area, and there’s always something happening. As a result many of my books have fairly urban settings…

Even Racier than EL James! Sierra Cartwright featured in the Daily Mail for her Mastered series and bestselling title, With This Collar.

Read the article and an excerpt from the book.