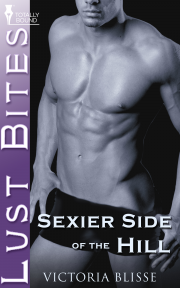 Sexier Side of the Hill

It's even hotter on the Sexier Side of the Hill…

Michelle has just graduated from university and is embarking on a new career as a doctor. She's going to have a big 40th birthday party to prove to her younger uni pals that she isn't over the hill, and on a booze cruise to France she has a sexy adventure with two hot bi guys.

It was late, or was it early? It was one of those morning hours that rest in the middle of the night and I was beginning to regret my clever, money saving idea.

“Ticket please.” The bus driver, at least, looked semi-awake. The bags under his eyes were old and worn in, like favourite slippers. I handed him my slip of shiny cardboard, and he clipped it, passing it back as I stepped up into the bus.

The smell of cheap cleaning products and musty seats enveloped me as I trudged down the aisle to the very back. I know it’s somewhat childish, but I couldn’t seem to shake the need to get as far away from the driver as possible. I settled in the back corner and marvelled at the number of nutters getting on this very bus at rude o’clock in the morning.

My excuse? I’m nearly forty. I graduated in the summer as a doctor and I wanted to throw a party. So I was off to France for cheap booze and an adventure.

The first few travellers to board after me were pensioners, a couple who smiled and nodded to the others up front. The gentleman helped his wife remove her coat and pressed a hand to her arm as she slipped into their seats. How very romantic.

It was the last two men to get on who really grabbed my attention. They were both handsome but completely different in appearance. The dark haired, cocoa-skinned guy was smooth and slick, his clothes pressed and reeking of expense. His complexion shone, and his shaven cheeks glowed with the health afforded by expensive beauty products.

The other man was rougher. His chin was studded with tiny whiskers which combined with the groggy look to his blue eyes and showed me he hadn’t been awake very long. He was dressed for comfort. His old, worn jeans definitely hadn’t been bought in such a shabby-chic condition and the old denim jacket was in matching condition.

The t-shirt beneath it all was plain but clean.

I wanted to leap on both of them, to dive in and take a bite from the smooth darkness and the light charm at exactly the same time. My mind, already filled with naughty images, and my body were on an erotic edge. It wouldn’t take much to tumble me over. I felt a tiny pang of guilt, thinking of Darren, my ex-boyfriend. I’d loved him—probably still did—but I remembered the fresh pain of us breaking up. It was time to move on, I reminded myself. I was indeed single again. I might not have been happy about it, but I was free and well within my rights to fantasise about these two handsome guys.

They sat on the seats across from me, their musk and citrus scents permeating the air. They both smiled as they sat down and I grinned back. I really wanted to speak, but I couldn’t think of a word to say. Put me at the scene of a horrific car crash and I’ll be as cool as a cucumber, calmly in control. Place me in a room with a dying cancer patient and I’ll find the words of comfort they need to hear. But put me in the presence of hot men and I seize up completely.

Luckily, one of them broke the silence.

“Excuse me.” The dark stranger smiled, his deep voice rounded by a plumy accent. “Do you know what time we will be arriving in Calais?”

“I think the driver said about lunchtime,” I replied, trying my best to smile seductively.

“Great,” the bit of rough growled, his voice vibrating straight into my cunt. “I can get a bit more kip now, then.”

The smooth gentleman smiled apologetically as his friend leaned back and rested his head on the window.

“Excuse, Paul.” He smiled. “He went out last night, and he’s still feeling a tad hung-over. My name’s Simon, by the way.”

What a cockle warming story this one, and downright sinfully sexy too, I've recommended it to all my friends and I hope there will be more from Victoria Blisse soon!

Sexier Side of the Hill is a story that brings on emotions for pleasure, and should be an exciting read for everyone.

Share what you thought about Sexier Side of the Hill and earn reward points.