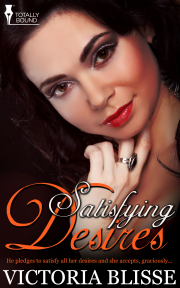 Lucas is the only man who can satisfy all her desires.

Sally has a broken wrist and is struggling to cope with being off work and home alone. She's eaten nothing but soup in days and is sick to death of daytime TV. She goes for a walk but is distracted by the delicious smells coming from the local café.

The tall and tanned Greek chef, Lucas, wants to look after Sally…and not just by feeding her with his delicious fried foods. He invites her back to enjoy a meal with him alone that night once the café is closed.

His special brand of optimism and dominance has Sally bending to his will and begging him for more. Their less than innocent evening meal is finished off by a trip to the bedroom with a pot of chocolate spread because, as Lucas says, the only thing better than a hot naked woman is a hot naked woman covered in chocolate!

Reader Advisory: This book contains creative use of fruit and vegetables.

Publisher's Note This story has been previously released as part of the Whip It Up anthology by Totally Bound Publishing.

I lay in bed after a long and boring day where I’d watched far more daytime TV than is good for a person. I’d eaten soup—tomato and basil for lunch, and carrot and coriander for dinner. I’d struggled to brush my teeth, wash and jump into my pyjamas for bed.

It took a while to get comfortable, hauling my arm into position, propping it up on a pillow. I shut my eyes, no longer tired. My brain ticked over and I wondered about getting back up, but what would I do if I did? There was always the old standby, the one thing that was guaranteed to send me off to sleep.

I bent over the imaginary desk and felt the unreal touch of my master peeling back my skirt and caressing my cotton covered buttocks. As I fantasised I slid my finger between my lips and struggled to get the angle right, to touch the places I like to touch. I tried to concentrate on the dream. It was my best bit, the anticipation of the first strike.

I played it out, waited for it and gasped when the ghost hand struck my ethereal buttock. The spanks continued and I felt the curling of desire deep inside. My fantasy played on, knickers removed, bare arse spanked, then his cock was forcing into me, his pelvis bouncing off my reddened buttocks, the pain highlighting the pleasure. I tried desperately to come, I really wanted to, I was desperate to but I just couldn’t find the rhythm and my wrist ached so much that in the end I gave up in frustration.

The annoying thing was I didn’t even break my arm doing anything dramatic. I was walking up the stairs to my office and managed to miss the top step. I caught my toe on it and tumbled forward—I broke the fall with my hand and crack, my wrist gave way. I don’t know how it happened and I maintain I was not staring at my male colleague’s bum at the time.

After breaking her wrist and being signed off work Sally is bored out of her mind after just a few days and starving - only so many bowls of soup can be eaten you know. She takes herself of for a walk...

I loved both the characters. They were easy to get into and understand. Lucas was the definition of Knight in Shining Armor from the start to the end. He knew exactly when to cajole, when to push and w...

Share what you thought about Satisfying Desires and earn reward points.

What is your writing process?

You’re supposed to have a process? Well, I’m in trouble. My stories tend to creep up on me. I don’t plan, I write and see what happens. I like to write in the morning when I can, my brain is best then. However often I’m writing at all hours just to get something finished to meet a deadline!