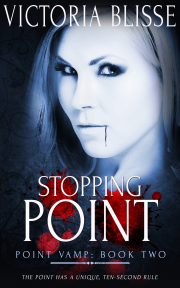 Book 2 in the Point Vamp series

Josh is a vampire…he just doesn't quite know it yet.

He is confused and his voluptuous sire, Cara is far too busy being mysterious to really help him unlock the secrets of his Afterlife. However, he pieces it together by himself and decides to turn his best mates into Vampires too. This doesn't quite go to plan but he does discover The Point and its unique, ten-second rule.

Cara does not approve of Josh visiting The Point but that night she turns up at his door bloodied and much more dead than usual, and accepts Josh's help to escape from her much older and much crazier Sire Leopold. How is Josh going to defeat an older, wiser and more powerful vampire? He hasn't a clue but for Cara he is willing to find out.

Reader Advisory: This book contains scenes of blood shed. This book is best read as part of a series, but it may also be read as a stand alone title.

Publisher's Note: This book has previously been published under the same title by Totally Bound. It has been expanded, revised and re-edited for re-release.

“Help me, oh dear God, please, somebody help me!”

Josh Barnett was not the most heroic of men but he ran into the undergrowth and headed toward where the voice had come from. He rounded the big tree, where he used to hang out as a teenager, and saw a pale lady dressed in black standing with her back to him.

“Erm, are you all right, miss? I heard screaming.”

“Oh, thank goodness,” she squealed and ran into his arms. She was as cold as ice. “I was so scared.”

“No, my dear,” she said as he hugged her tight. “I was just ravenously hungry, that’s all.”

Without a moment’s hesitation, she ripped into his neck with her teeth. It was Josh’s turn to scream. At some point he lost the strength to fight and consciousness flowed from him. He felt a twinge of embarrassment as he slipped to the floor, dripping wet with his own sticky blood. He hoped no one would discover he had been murdered by a mad woman.

It was still pitch black when Josh came round. Strangely enough he felt really good. He tentatively rubbed his neck and found no gash, no teeth marks or exposed flesh or bone. As he sat up, he checked other parts of him, too, and no, they were all fine. Josh sighed and wondered what on earth had happened. Maybe the woman had actually been a junkie and had injected him with something for a laugh? You never knew what drug addled folk would do.

He picked himself up and decided to walk the short distance home. He was no longer in the mood to be social.

When he got home he soon realized something strange was going on. His clothes were soaked through with blood and he was pretty sure it was his. He stripped them off and put everything in a black bin bag to dump. It was all ruined, even his brand new pair of trainers. He’d only been out to get them the day before.

He climbed into the bath to clean the dried-on blood and dirt from his skin and, as he scrubbed, he found himself getting hungry. He shrugged it off—after all he’d not eaten a thing since he’d come home from work at five, and had heated up a microwave hamburger and some chips for his tea. He’d make himself a sarnie or something when he got out, but he thought it funny that when he specifically thought of food, he began to feel sick.

When he found himself taking a handful of reddened bath water to his lips to taste, he freaked out. Why the hell would he want to drink that bloody, dirty water? He doubted it would taste good and he was more and more certain the damn woman had drugged him or something. Determined to sleep the bad trip off, he got dried off and went to bed. But he couldn’t sleep. He was hungry. Deeply hungry, but not for anything he had in. Every time he thought of something he had in his fridge or his cupboards, his stomach heaved. But when he tried to think of other things, his appetite became so strong he felt as if his stomach was tying itself in knots.

Josh is happy and content in his life - that is until he hears a woman screaming and runs to her aid. Next thing he knows he is craving blood - yep - he's been turned into a Vampire by the rather nutty...

Josh is your typical lad, cruising through life, working in a supermarket during the day, enjoying nights out with the lads and loving the ladies. His world gets turned upside down when the crazy Cara...

Share what you thought about Stopping Point and earn reward points.

Other books in the Point Vamp seriesView Series Page