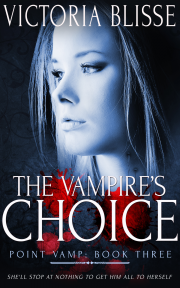 Book 3 in the Point Vamp series

A crazy vampire or an ice-queen human, it's not much of a choice but it is the one Kyle has to make.

Kyle may be undead, but he still lives at home with his Gran and works in a supermarket stacking shelves with his mates. His life hasn't changed much, apart from being dead and having to suck blood from live humans to survive.

Luckily he knows The Point, a vampire bar where the humans are hot, tasty and eager to please. Well, most of them are. Janine is the exception. She is cold and distant, but from the first time he meets her, Kyle is smitten.

But he has a problem. A hot but crazy female vamp has got him in her sights and she'll stop at nothing to get him all to herself.

Kyle has a decision to make and it will change his afterlife forever. Who will he choose?

Publisher's Note: This book has previously been published under the same title by Totally Bound. It has been expanded, revised and re-edited for re-release.

I was twenty-three when I was turned into a vampire. In school I’d wanted to be a fireman—vampire wasn’t even on my list of possibilities. But I didn’t get anywhere close to becoming the fireman of my dreams. I wasn’t fit enough or driven enough. I went to college but only because my mates Josh and Steve did—then I got a job in a supermarket just to keep me going until I found a real job.

I didn’t ever find a real job, but my best mate Josh turned me. I hadn’t a clue he was a vampire. All right, he’d been acting weird for a while, but he steered clear of garlic anyway and had never really been religious. He didn’t have a tan, either. He jumped on my friend and me in a club. It wasn’t until we were back at Josh’s flat with some rather attractive girls that he told us.

It hadn’t sunk in until the next day. I was living with my eighty-year-old gran at the time. I’d lived with her since I was ten and she was my whole family. It was as I sat down to breakfast with her that I realized I was no longer human. I was a monster and Gran would kill me if she knew—literally. She had strong, Catholic beliefs and did not hold with anything that Father O’Mally wouldn’t approve of. I decided then and there that Gran could never know about my condition.

“Eat up your breakfast,” she said, slapping a huge mug of tea on the table in front of me. “You’re a growing lad. Are you working today?”

“No, Gran,” I replied, “it’s my day off.” I tried to eat a piece of bacon, but as I raised it to my lips the smell from it knocked me sick.

“Well, you could come to Mass with me then,” she said, turning around from her position at the sink. “Father O’Mally would be so pleased to see you.”

“I can’t, Gran,” I said, feeding my bacon and sausages to Billy, our old, half-blind dog.

“Why not?” she snapped. “What could possibly be more important than the saving of your immortal soul?”

I wasn’t sure I had a soul. I wasn’t much into horror flicks or reading, but something told me that vampires were well known for lacking in the soul area. I couldn’t tell Gran that, though, so I scrabbled for an excuse.

“I promised Josh I’d take him over to his gran’s grave,” I quickly lied. “It’s the anniversary of her death, you know.”

“Aww.” Gran turned from the sink and clasped the tea towel to her heart. “The poor boy. Well, that’s very kind of you, Kyle. I’m sure the good Lord is proud of you.”

Gran’s sweet smile was enough to break my heart. I hated lying to her. I sighed. I would have to get used to it.

“Oh, deary, don’t upset yourself.” Gran shuffled over to me and laid a hand on my shoulder. “She’s in a better place now.”

“I know,” I said, glad Gran had assumed the reason for my sad face instead of asking me to explain. “I’m glad I’ve got you, Gran. You’re the best.”

But I had and there was no way back. Gran left for church after washing my plate and mug. She had her Sunday best hat on and took her best walking stick from the rack in the hall. She was a very proud lady and always wanted to look her best for church. ‘God judges the inside,’ she’d tell me, but that Hilda Sullivan would judge the outer and she’d be damned if she’d give her anything to gossip about.

I adore Kyle and was smitten with his story. When he meets force of nature Janine, he is immediately taken with her. She has a complete hands off policy though, will Kyle's sweet nature break throu...

Share what you thought about The Vampire's Choice and earn reward points.

Other books in the Point Vamp seriesView Series Page