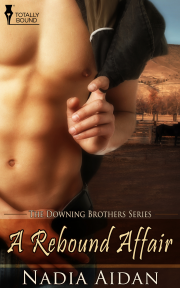 Book 2 in the The Downing Brothers series

Jackson Downing is back and he has quite a woman to deal with in ranch owner BJ Parker, but lucky for him, his brothers are there to lend a helping hand in taming the headstrong lady.

Forced to sell her family ranch to the Downing brothers, tomboyish, rough around the edges BJ Parker is less than thrilled when pretty boy, city slicker Jackson Downing shows up and begins to take charge. Used to running things on her terms, and doing things her way, BJ wants Jackson Downing gone as soon as he sets foot on her land.

Nursing a broken heart, the last thing Jackson wants to deal with is a woman, let alone a difficult one, but that's exactly what he gets in BJ. Despite what BJ thinks he's not there to become the boss, he only wants to set up drilling operations and use the time to heal his wounded heart.

From the moment they meet, sparks fly. But what begins as mutual animosity quickly develops into something more. If BJ and Jackson can put aside their distrust and dislike for each other long enough to explore the passion burning between them, they may discover a love they never expected to find.

Reader Advisory: This book contains ménage or more sex and is best read in sequence as part of The Downing Brothers Series.

“I think I’m in love with your wife.”

Jackson Downing stood ramrod straight, and steeled himself for the blow he knew would come. He deserved to be pummelled by Jacob and they both knew it. His brother had warned him that his attraction to Camille was more than just attraction. But he’d sworn to Jacob he was over her, that he’d accepted their marriage and was moving on, but he had lied. He was certain Jacob had known he’d lied, but his brother had said nothing at the time.

A tense silence permeated the room as they regarded each other warily. He had to admit he was a little surprised Jacob hadn’t launched over the desk and beat the shit out of him as soon as the words left his mouth. Jacob had inherited the infamous Irish temper of their maternal grandfather, more so than any of the Downing brothers. So, he took it as a good sign that since Jacob hadn’t resorted to violence, he still might be open to talking this out.

“I know,” was all Jacob said, his already harsh face giving away nothing as he sat behind his desk, his entire body rigid.

“I figured you knew, which is why I’m leaving.”

Jacob sighed. “And I had a feeling you were going to say that.” He stood up from his chair and Jackson met the identical dark sapphire gaze of his brother.

“I don’t want you to go, but I know this has been hard for you.”

Jacob had no idea. Watching the woman he’d spent the past seven months falling in love with walk down the aisle with the brother he was closest to, was more than hard?it was excruciating.

“And now you want to go in my place.”

Jackson shrugged. “It could take a while to get the pipe in place, months even. You’re a newly wed and it just doesn’t make sense for you to be gone for months away from Camille when I can go instead.” He wanted to add that he needed this trip more than anyone else, but he didn’t. They both knew how desperate he was to get away from Macon, Texas.

“It’s going to be a tough job and you’re going to have your hands full with a foreman who is pissed that we’re the new owners. I haven’t met him, but he hasn’t returned any of my calls and our email exchanges have been less than polite?”

“I don’t care. I’ll deal with it.” He knew Jacob wouldn’t deny him this. Besides they were well aware that with his laidback attitude and easygoing demeanour, Jackson had always been better suited than any of his brothers in dealing with business conflicts and handling negotiations.

“Alright.” Jacob nodded. “If you want to go then the job is yours.”

Jackson released a drawn out breath. Separated by just two years, Jackson knew his brother well, and could tell from the strained expression on Jacob’s face that he really didn’t want him to go, at least not like this. But, they both knew he had to.

There was no way he could remain in Macon any longer. Being away and dealing with the distraction of getting the pipeline running would hopefully give him the time he needed to get over Camille.

It had all seemed so simple. For six months Camille would serve his sexual needs and those of his three brothers, and when her time was up they would all walk away. Then, Camille would get her ranch back when it was over. But at some point along the way, Jacob and Camille had raised the stakes by falling in love. It was just unfortunate that he’d fallen in love with her too. He didn’t begrudge his brother or Camille for finding happiness with each other. But he would be lying if he didn’t admit that he hadn’t taken it so well when Camille chose his brother over him. That she’d fallen in love with his brother and not him.

One of the hardest things he’d ever had to do was to stand beside Jacob and watch as he said “I do” to Camille. Ever since that day he’d been distant and withdrawn from Jacob, and it pained him to think their relationship would never be the same ever again. That had been the deciding factor for him. He had to leave and at least try to move on for all their sakes. He’d lost Camille and if he didn’t learn to get over her, he would lose his brother too.

Nadia Aidan writes a fast paced story with snappy dialog and an intense attraction between BJ and Jackson. I read this in a one time sitting, unable to pull away because I was anxious to see what...

Share what you thought about A Rebound Affair and earn reward points.

Other books in the The Downing Brothers seriesView Series Page