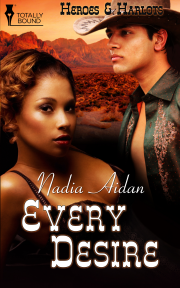 Book 1 in the Heroes and Harlots series

Can a jaded Madame find love in the arms of a stand up sheriff with a shady past of his own?

Tough as nails Madame, Montgomery LaCroix has built her brothel, Every Desire, from the ground up and she'll be damned if the new sheriff thinks he can just walk into town and shut her down, no matter how handsome he is.

Sheriff, Wayne "Ravenclaw" Kincaid came to the town of Redemption, looking for just that, and he is not going to let some smart mouthed madame keep him from doing his job no matter how tempting she is.

Never one to back down from a fight, Montgomery takes on the handsome sheriff, by making a twisted deal with him, but quickly realises the sheriff is not what he seems and finds herself discovering that there may just be one man in the entire world strong enough to claim her, when Cade proves he is more than man enough to tame her.

“You have two days to close down your whorehouse or else I’m throwing you in jail.”

Madam Montgomery LaCroix’s kid boots kicked up a swirling cloud of dust as she stomped all the way down Main Street towards the Sheriff’s Office.

Clutching the offensive letter in her hand, she was so mad that she barely noticed the townspeople of Redemption openly gaping at her. As the Madam of the only brothel in town, she was either on the receiving end of barely veiled disdain, or openly perverted lust, which was the main reason why she kept to herself and rarely ventured into town. Today she had no choice. The new sheriff had declared war on her and her establishment leaving her no other option but to defend her livelihood.

When she reached the Sheriff’s Office, she saw the wooden panelled door was slightly ajar, and she didn’t even bat an eye as she kicked it in, sending it slamming against the wall.

The two deputies on duty jumped out of their seats, their hands cupping the revolvers that hung low on their hips as they stared at her in wide eyed confusion.

“I need to speak with Sherriff Kincaid right now, boys!” Her gaze darted between Deputy Reynolds and Deputy Scott. They stood there shivering in their boots at the anger that radiated from her petite body like steam off a pond on a hot summer day. Both deputies were frequent visitors to her establishment. She wondered how they felt about the new sheriff coming into town and trying to shut her down.

“Good mornin’. What can we do for you Miz LaCroix?”

“Reynolds. Don’t make me ask you again,” she snapped at the stuttering man. She almost felt sorry for him. Everyone knew she had a helluva temper, and she knew the young deputies didn’t want to tangle with her when she was mad enough to spit nails. She also realised they didn’t want to upset their new boss either by throwing him to her mercy when she was as mad as she was.

Taking pity on the poor boys, she decided to just skip the middlemen entirely. “Oh, forget it. I’ll go find him my damned self.” She lifted her long skirts and marched around them before they could stop her. She then stomped her way towards another room in the back of the office where she knew they kept the jail, but drew up short when a hulking giant of a man stepped through the doorway, effectively blocking her path.

“Reynolds and Scott, can you give me and the lady the room?”

While the deputies scurried from there like wild mice, Montgomery tilted her head back to get her first good look at the new sheriff. Good Lord! She’d heard whispers from her girls that the man was handsome, but she’d let those same whispers roll off her back. Handsome men were a dime a dozen. And most of them were cruel, selfish men, who didn’t much know a damn about pleasing a woman even if they wanted to. Still, the man that stood before her was so far beyond handsome that it should’ve been a holy sin. His raven hair hung like a sheet down his back, framing the harsh planes of his gorgeous sun-bronzed face. Half white and Indian, the sheriff was the perfect embodiment of his mixed heritage, and she stood there drowning in his sea green eyes as a slow heat ignited between her thighs to fan out across her skin.

“You must be Miz LaCroix.” She nearly shot up outta her boots when the deep timbre of his voice snapped her back to the present, reminding her why she was there in the first place. A fresh wave of anger roiled inside of her. Men were manipulative bastards. Long ago, she’d learned that the hard way and that thought was enough to cool her budding desire like a bucket of ice water being dumped over her head.

“Don’t play the fool with me, Sheriff,” she seethed as she lifted her fist that held the crumpled letter and threw the slip of paper at his broad chest. “You have no authority to issue such a threat to me or my business.”

4.5 out of 5! Every Desire is the first book in Nadia Aidan's newest series Heroes and Harlots. I'm looking forward to reading the next book in the series. Ms. Aidan is quickly becoming...

Share what you thought about Every Desire and earn reward points.

Other books in the Heroes and Harlots seriesView Series Page

Buy Now: £1.99
A Madam into a Mistress
Nadia Aidan