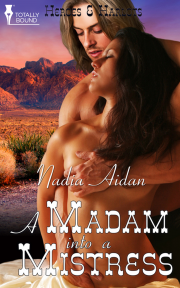 A Madam into a Mistress

Book 2 in the Heroes and Harlots series

A deputy bent on revenge will have the pleasure of turning a haughty madam into his mistress where she is now his to use the way she used him.

Deputy Marshal Shane Duckett has come to the town of Redemption with only two things on his mind—revenge and Madam Cherie Launbauer. Eight years ago, Shane was naïve and in love, and because of this he was easily deceived.

Cherie used Shane's innocence against him, and easily seduced him. She ended up escaping from jail on his watch, while he ended up spending two years in a federal prison for trusting and loving the wrong woman. But now he is older, wiser, and full of bitterness and has found his way to Redemption and on Cherie's doorstep where he intends to drag her back to prison and make her serve out her sentence.

But Shane soon learns Cherie has made mighty powerful friends on the right side of the law, and they're not too keen on seeing her locked up in prison. They offer Shane another alternative. For every day spent in prison because of her, Cherie will spend a night in Shane's bed as his exclusive mistress. Not the revenge he'd envisioned, but certainly a just sentence.

Cherie will be his mistress, there to serve his needs, to see to his pleasure, and only his pleasure. Shane will have the pleasure of turning this haughty madam into his mistress where she is now his to use the way she once used him.

Her next words died in her throat, and she gasped, her eyes rounding when she saw her guest and recognised him instantly.

The man on her doorstep towered over her, his muscled frame blocking out the moonlight that gleamed against his broad back. His wild blond hair curled against his shoulders, while his full, sensual lips lifted into a heart-stopping smile.

It had been eight years since she’d seen him last, and there were visible changes, but one thing would never change, she was sure, and that was his piercing sapphire eyes that were so intense she swore they could burn a hole straight to her soul. Another thing she sure would never change, no matter how much time passed, was the devastating effect his probing stare always seemed to have on her body. She shivered at the wave of heat that suddenly coursed through her.

“What are you doing here?” she asked shakily, finally finding her voice.

He pushed past her, and she bit her lip to keep from letting out a low moan when his hard, muscled body brushed against hers. He smelled of sandalwood and pure masculinity, a combination that had always been lethal on him, and she shuddered as the scent of him filled her lungs.

“I’m here to arrest you,” he said, shaking her from her thoughts, and she blinked at him wondering if she’d heard correctly.

“You heard me, Ms. Parkins, although I hear it’s Launbauer these days.” He gave her a sardonic grin. “You’re under arrest.”

“For what?” she sputtered.

U.S. Marshal Shane Duckett slid his gaze over the woman before him. These past eight years had certainly been kind to her. He almost wished they hadn’t been. So many times, he’d imagined she was now a dried up old whore—her lifestyle taking its toll on her. But the woman before him seemingly hadn’t aged a bit. Her skin was still as creamy smooth as he remembered, her flowing midnight tresses still unruly. They appeared soft as silk as they fell in wild abandon around her angelic face. Her liquid hazel eyes were still as hauntingly beautiful as they’d been the day he met her.

He hated to arrest her, especially when he knew a jail cell was the last place she belonged. In his bed was certainly a preferable alternative for the lovely, Cherie Launbauer. But he’d come all this way and had dedicated the last six years of his life to tracking her down. He’d spent two years in a federal prison because of her, envisioning this very moment—the day he would haul her back to jail, and nothing would stop him from seeing Cherie was brought to justice.

A reviewer Top Pick! A Madam into a Mistress by Nadia Aidan was one of the best western Novella's I've read... Ms. Aidan's writing evoked such strong emotions that I was entranced through...

A Madam Into A Mistress was much more than I expected after reading the summary. The author did an excellent job portraying the feelings of the characters which made the story so much more meaningful...this...

Share what you thought about A Madam into a Mistress and earn reward points.

Other books in the Heroes and Harlots seriesView Series Page