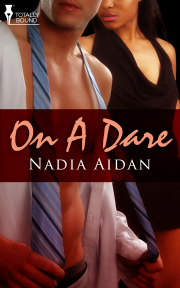 Can best friends of the opposite sex actually maintain a platonic relationship? At one point Selena "Lena" Coleman thought so but not anymore. Not after her best friend, Dylan Jacobs practically seduces her on her disastrous wedding night and certainly not after she finds herself forced into spending the next two weeks as his lover.

It was supposed to be so simple—a harmless dare. But nothing is ever simple when two long time friends discover what they've known all along—that they've always been more than just friends.

Now Lena and Dylan must decide if it is worth it to risk their friendship for the chance at something more.

“If you want to really drive him crazy, purr softly into his ear as you gently rake your nails across his chest.” Dylan Jacobs arched a single brow, his expression incredulous. “You can’t really believe this junk?”

His best friend and roommate, Selena ‘Lena’ Coleman, plucked the magazine from his hands, her brown eyes flashing with annoyance. “How many times have I told you about reading my mail?” She flipped the magazine around and jabbed her finger at the cover. “You see this title? It says Today’s Black Woman. Last time I checked you weren’t a black woman of today.”

He folded his arms across his chest and snorted. “No, but if all the black women of today take that ridiculous advice there are going to be a whole lot of angry men in bed. That crap would only work if you were a tiger who likes to be mauled by your woman.”

She shot him an irritated look and hopped off her breakfast stool to empty her coffee mug in the sink.

While her back was still turned, he reached across the counter and grabbed the magazine again. He flipped back to the page he’d been reading. Twenty Never Before Seen Moves That Will Have Him Begging For More. He bowed his lips into a frown.

“Begging for more. More like begging for a doctor,” he muttered as he zeroed in on another tip.

“Slip your tongue inside his ear and then blow softly. The tingling sensation will leave him breathless.” His eyes shot to her face which was now scrunched up in annoyance. “Lena, that’s just ridiculous. You’re blowing in his wet ear. How is that a turn on? Seriously, where do they get this? Certainly not from any man I know.”

He stretched his arm high above his head to hold the magazine out of reach when she lunged for it. At six foot five, Lena’s five foot three frame was no match for him, not even with the shiny black pump stiletto heels she had on.

Her dark chocolate brown eyes pleaded with him. “Dylan, give me back the magazine.” He smiled down into her pretty heart shaped face that now glowed with exasperation. Her smooth cinnamon complexion appeared flushed in the early morning light and he could see tiny splotches of red darkening her cheeks. When she realised he wasn’t about to return her magazine anytime soon, she released a long sigh, folded her arms across her chest and leaned back against the breakfast bar. “You know what? Now that I think about it, I really don’t believe those suggestions are as ridiculous as you’re making them out to be. That column is written for black women and black men. There are obviously cultural differences which is why you don’t think these tips can work—”

He couldn’t even wait for her to finish before he burst out laughing. What she was suggesting was ridiculous. She pressed her lips into a tight line and he laughed even harder, but when she shot him a chilly glare he covered his mouth with his fist until his chuckling slowly died.

“Like I was saying before you so rudely interrupted me. The target audience may be different from your experiences.”

He snorted rudely. “Black, white, Asian—men are all the same.” He gestured toward the page he’d been reading. “You try this crap on any man and I can tell you he won’t be begging for more. He’ll be begging for mercy.”

“So, you’re going to tell me that no woman has ever done any of those things on you?”

He quickly skimmed the four pages of the article, before returning his gaze to her face.

“Ah ha,” she smiled triumphantly. “You proved my point. You’re not the target audience.”

He lifted his lips into a cocky grin and shoved the magazine at her. “Okay, if that’s true then read through it and tell me if you’ve done any of these moves.”

She snatched it from his hand and lifted her eyebrows, her eyes full of challenge. He covered his mouth with his hand and coughed loudly in an effort to hide his smug grin when a dark scowl crossed her face.

She flipped the pages back and forth, frantically searching for at least one thing that she’d done in order to prove him wrong. A full minute passed and she was still skimming.

“You’re Today’s Black Woman. Come on. You haven’t done at least one of those moves. Where you been, Lena?” His eyes twinkled with mocking laughter.

She rolled her eyes at him. “It says never before seen moves—”

“Oh come on. You know no man in his right mind would enjoy any of that stuff, which is why you haven’t done any of these so called tricks. I bet your girlfriends haven’t either.”

She pursed her lips into a frown, folded her arms and propped her hip against the counter.

“No, I’ll admit it. I haven’t done any of them, but who’s to say they aren’t worth trying.” She shrugged. “They’re a little risqué, but not unusual. I bet some of them would even be fun.”

He stilled at the challenge in her eyes. He’d seen that look many times before. They’d been best friends since their freshman year at the University of Florida. That look had gotten him into more trouble than he wanted to remember.

“What?” She asked and her brown eyes grew wide with a deceptively innocent look. “You’ve never had any of these moves done on you, so you don’t even know if you would like them. And I’ve never done them either, so I don’t know if they work.” She quirked her lips into a wicked grin and rubbed her hands together like she was making a wish. “I feel a wager coming on.”

He hung his head as a groan escaped his lips. That had always been their line when they were about to make a stupid bet that would land them in huge amounts of trouble. “Lena, we’re too old for this.”

“Oh no you don’t.” She wagged her finger in front of his face. “You started this. So now let’s make a bet.”

How had a round of good natured teasing ended up turning into another one of their infamous bets? He knew he was going to regret this.

He folded his arms across his chest. “What do you have in mind?”

Lena curled her lips into a Cheshire grin.

“I believe these tips you call ridiculous actually work, so I want us both to try them—all of them. I say we have two weeks to complete them and whoever finishes first wins.”

“Whoever finishes first wins,” she repeated. Dylan scowled. It wasn’t like he couldn’t hear her. He’d heard her just fine. He just couldn’t believe what she’d said. This wasn’t the first time they’d made a ridiculous bet involving sex, but it had been many years since their last escapade. Long before they’d both been married and divorced. They were too old to be acting like college co-eds again.

“Don’t you think we are too old to be doing this?”

Lena’s eyes flashed with indignation. “Maybe you’re old, but I’m not. We are both newly divorced i.e. newly single. I don’t know about you, but I am ready to have some fun.”

He didn’t miss the slight catch of her voice when she said the word ‘divorced’. They’d both had a rough year, with the failure of their marriages coming just months apart. She was right. They could use a good dose of fun.

A spark of mischief lit up her face. From the look in her eyes one would think she’d won a small victory.

He felt his own devilish nature rising. This could be fun after all.

I really enjoyed this book. The chemistry between the two characters is sizzling hot. It was a short read, however it was short, sweet and to the point.

Great book. The characters were likeable and the heat is scorching. There is also a secondary story and looking forward to that one too.

Share what you thought about On a Dare and earn reward points.