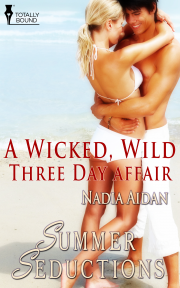 It was supposed to be a three day affair, but Vegas lights, and wild, hot nights led to something so much more.

Traditionally, a best man and maid of honor are there to support the happy couple, and keep them as calm as possible before their wedding, which is the only reason why Grant and Monica haven't traded blows, even if they can't stop trading insults.

When Grant shows up to witness the quickie Vegas wedding of his best friend, he takes an instant disliking to the maid of honor, and the feeling is mutual.

Monica knows her style of dress is a far cry from conservative, actually not even close, but she is not the superficial, vapid gold-digger that Grant seems to think she is. After years spent as a gangly, unattractive shy geek, she has finally embraced her body and refuses to let anyone trample upon her hard earned confidence, especially not an old-fashioned, chauvinist snob like Grant.

From the moment they meet the fireworks fly, as they battle their attraction to each other, preferring to hide it behind their mutual animosity. But their attraction refuses to be ignored, sending them spiraling head first into a wicked, wild three day affair with more than enough heat to scorch the Las Vegas desert.

Monica Peterson peered over the shoulder of her best friend, straining to catch her first glimpse of Soledad’s soon-to-be husband, Drake. “Where? I don’t see anyone.”

“Right there,” Soledad exclaimed, and Monica followed her lithe frame with curious eyes as she raced through the crowded airport to fling herself into the arms of an extremely handsome man.

Her eyebrows knitted together as she raked her gaze over Drake Bradshaw, who was the much talked about and well-lauded love of her friend’s life.

“Well, she told me he was white,” she muttered under her breath, navigating her way through the bustling, baggage-claim area towards them. But she hadn’t quite been expecting the Stetson wearing, blond-blue eyed hunk who looked more like he’d stumbled off the last rodeo circuit and less like he was the CEO of a midsized computer software firm.

As she drew closer to the couple, she realised Drake hadn’t come alone. Her gaze slid over the tall, distinguished man, his large frame encased in a custom-tailored, charcoal grey suit that fit him perfectly. He stood off to the side, his handsome face twisted into a dark frown as he stared straight at her with piercing green eyes that bore into her so deeply she almost swore he could see straight to her soul.

Her steps faltered, and she cursed her four-inch, spiked-heeled sandals, but she knew her shoes had nothing to do with her stumble. It was the way he looked at her, that probing, searching stare of his that caused a curious stirring in her belly.

Whoa. What the hell? He was certainly good looking. Okay, very good looking but she tamped down her body’s instant and completely unexpected attraction to him. He didn’t like her. She could tell by the way he openly glared at her, and when his arrogant gaze roamed over her before abruptly glancing away, she knew she wasn’t going to like him, either.

She shook with barely controlled anger. He’d just dismissed her. The jerk. He didn’t even know her, yet he’d already written her off, which left her to ponder the identity of this mysterious and bad-mannered man.

“Monica, this is Drake,” Soledad gushed with a bright smile, dragging Monica’s attention to the beaming couple.

Shaking her head, she bit back a tiny grin. She’d never seen Soledad like this, but she was happy for her best friend. She certainly deserved a good man, and it seemed as if she’d found one in Drake.

“Hello, Drake. It is certainly a pleasure to finally meet you.” She stuck out her hand, but he ignored it as he tugged her into his arms for a burly hug.

She was so taken aback by his friendliness that for a moment she just stood there frozen with shock.

“Soledad talks about you all the time,” Drake said. “It’s a pleasure to finally meet you, too.”

“Oh, sorry,” Drake said, his arms relaxing around her.

“It’s fine.” She smiled as she patted his back, grateful she could breathe again when he released her.

3.75 out of 5! The ending was adorable in light of how they began, and this was one read I couldn't put down until I had finished it.

Share what you thought about A Wicked, Wild Three Day Affair and earn reward points.