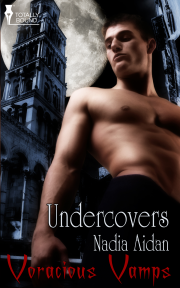 When two detectives go undercover to bust up a prostitution ring, passion and love ignites, leaving them both stripped bare.

Sexy, playboy detective Roarke Dimitru has always enjoyed his carefree lifestyle and the lovely ladies that come with it. He isn't cut out for a heart mate and is convinced one woman will never be enough for him, until he meets Jasmeene LeCourt.

Despite her attraction to the older vampire, Jasmeene LeCourt has no time for ladies man Roarke Dimitru, and makes her dislike for him well known. Jasmeene is determined to keep Roarke at arms length, but they wind up getting a lot closer, and things become a lot hotter when they go under cover to bust up an illegal prostitution ring. Posing as one of her clients, Roarke will seduce Jasmeene until he has torn down every wall erected between them, leaving her stripped bare.

Reader Advisory: This book is best read in sequence. It picks up where Mating Season from the Caught in the Middle Anthology leaves off.

Jasmeene LeCourt smoothed her sweaty palms down the length of her jean clad thighs, blowing out a long, shaky breath. Butterflies fluttered in her belly, but she ignored them and lifted her fist to rap softly against the door.

The deep, brusque voice on the other side called for her to come in, and before she lost her nerve she stepped inside.

Lieutenant Roarke Dimitru’s head was down, his attention focused on the stack of papers littering his desk. Jasmeene studied the older vamp, and the impressive swell of muscle and sinew beneath his grey t-shirt, the corded thickness of his large biceps straining against the soft fabric. He was a ruggedly handsome man with his stubbled jaw and chestnut brown locks that curled lazily around his broad shoulders.

His head snapped up then, and her gaze collided with his piercing emerald green eyes that she swore could see straight to her soul.

“Can I help you, Detective?” His full lips curled into a flirtatious grin and he leaned back in his chair, his hands clasping behind his head, drawing her attention to his broad and defined torso.

She fought not to roll her eyes, her lips twisting into a frown. He thought he was God’s gift to women—all women—supernatural and human alike, and he never passed up an opportunity to display the reason why he held that notion. She hated men like him, men who took advantage of women just because they could. Men who were liars, cheats and users. Had she not been a rookie, and had he not been her superior, she would have told him what to do with his conceit. But she needed this position, this assignment in particular, and was determined to do a good job. She was the first, and only of her kind to be recruited to the Las Vegas Supernatural Crime Unit. She had a lot to prove—mainly that she was just as capable as any other supra.

“Captain Alekseev sent me. Said you needed a single female for this assignment.” She’d thought it was a strange request, the need for a single female, until she’d read the specs for the case. There were already few females who worked for the unit, even fewer single females, and none who possessed her unique talents. The captain had picked her because she was the only one in the entire unit who could actually complete the assignment.

Roarke raked his gaze over her, and she bristled when his eyes settled on her breasts, before dipping lower to stare at the juncture between her thighs. Her temper—that blasted Southern temper of hers—flared to life, and a fiery insult was on the tip of her tongue when Roarke abruptly shot out of his seat and propped himself against his desk, his arms folding across his chest.

4.5 out of 5! The suspense and the sexual tension will definitely grab the readers. Nadia Aidan did a wonderful job in Undercovers...

...a great read with a strong story and great characters...Ms.Aidan knows how to turn up the heat...

Share what you thought about Undercovers and earn reward points.