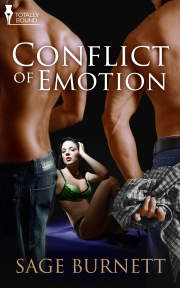 Feeling sexually adventurous, Grace Walters places a personal ad on an Internet dating site, seeking two younger men. She's in her sexual prime and since her divorce she's been celibate. She craves one night with two men to pleasure her with no strings attached. The two men she chooses are best friends, but Jared Forrester and Devon Granger are as different as night and day.

Devon, with his blond good looks and easy going manner, instantly charms Grace. But Jared, the dark and brooding type, tries to throw a wrench into her plans of fulfilling her fantasy of a ménage à trois.

Jared wants Grace to himself, so he does his best to persuade her to call off the tryst. Grace is attracted to both men, but the attraction she feels for Jared is much stronger and powerful. So powerful, Grace begins to wonder if her sexual fantasy will actually come true.

A cold beer in one hand and the TV remote control in the other, Jared looked over at his friend, Devon Granger, sprawled out on Jared’s brown leather couch. “Hey, are you ever going to come up for air so we can watch the game?”

Devon peered over his laptop, a wicked grin lighting up his face. “I just hit pay dirt. Or maybe I should say ‘we’.”

Some people lived by the Bible, but Devon lived by the computer and all things high-tech. His best friend was wired in, plugged in and connected to the wireless world to the max. “Yeah, what’s that? Swamp land for sale in Florida?”

“Not a land deal. A woman that wants two good men.”

Jared took a pull of the beer. “Does she need help moving? ‘Cause, I gotta say, our incomes have increased enough over the years that we don’t need odd jobs.”

“This isn’t about work, buddy. It’s all about sex. She’s looking for a mènage a trois.” Devon waggled his blonde eyebrows.

Jared frowned. “I thought you were reading stocks, and instead you were checking out dating sites? It really doesn’t matter anyway. I’m not interested.”

“Hear me out. She posted a personal ad. She’s forty-one and is looking for two younger men. That’s us.” Devon glanced back at the computer screen. “Let’s see if she posted a picture.”

And Devon had ended up with Amanda for a year. “Hmm...sexy, in a straight kind of way. Straight can definitely be sexy.” Devon studied the computer screen for a couple more seconds. “Take a look at her.”

“I’ve already said I’m not playing.” He definitely needed a good roll between the sheets, but he wanted the woman to himself. No sharing. He’d done it once, and he’d ended up the on the losing end of the stick.

With one hand, Devon held the laptop out to him. “For chrissakes, just take a look.”

What would it hurt? Hopefully, it would shut up Devon so they could watch the game that would start in less than five minutes. He leaned over the arm of the recliner and took the computer. An unexpected spark of sexual attraction zipped through him when he studied the woman.

Most of the women and men that posted on these sex sites were in various stages of undress. Not this woman. She wore a navy blue suit with a plain white blouse underneath the jacket. Her coffee coloured hair was tied back in a low ponytail.

“How dense are you?” Devon snatched the computer back from him. “She wants to let go, have a fling. She specifically advertised for two younger men. Guys who can go the distance. Besides, she’s in her sexual prime.”

The woman’s picture firmly lodged inside his head, Jared shook his head. “We’re not that much younger.”

“Come on. You’re not still holding a grudge against me about Amanda, are you?”

Jared scowled at his friend.

“I know you’re not. We talked about it years ago. This is about showing a woman a good time. It’s not like we’re looking to get involved with her except for the tryst.”

“Wouldn’t you rather have two women for a mènage?” Some day he might get lucky and have that fantasy fulfilled.

“Been there, done that.”

“Oh, yeah?” They might be best friends, but out of respect for the women the two of them dated, they usually kept the details of their sex lives to themselves.

“Remember when I flew to Denver for a business convention two years ago? Two ladies from Seattle. Hmm...that was one good time.” Devon smacked his lips together. “Lovely ladies. Nice, too.”

Jared chuckled. Devon was not only a computer geek, he was also hot-wired into sex. “Good for you.” He raised the bottle in salute.

“Ah, but I saw how your eyes lit up when you looked at her photo. You were practically drooling.”

In the winter besides writing, which is a year round endeavour, she also loves to snowshoe and enjoy the winter wonderland that she calls home. In the summer, it's hiking, camping, and bear watching. A good summer day is when one of those magnificent creatures wanders into her yard. Sage has one book published under her real name, Patricia Parkinson, at Samhain Publishing. Sensual Contemporary Romantic Suspense.

For a short, sexy romantic read, Conflict of Emotion hits every high point that I look forward to when reading.

Share what you thought about Conflict of Emotion and earn reward points.