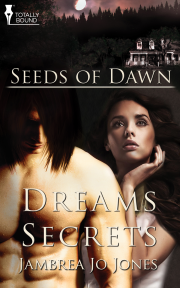 Publisher's Note: This story has been previously released as part of the Over the Moon anthology by Totally Bound Publishing.

Secrets: They have a way of sneaking up on you.

Max Rockwell is the muscle. Give him a good fight and he is ready to go. Sick a sexy reporter on him and he is doomed. The pack secrets are safe with him. He wouldn't spill them even if his life depended on it. But what if it isn't his life he has to worry about?

Valerie Thomas wants a story and the smoking hot Max will give her want she wants. What she gets is more than she bargained for. Creatures she couldn't even begin to imagine are after her all because fate is a bitch.

David Sanders sat in the diner in the podunk town of Robinsville, ready to give up. His alpha had sent him to this rat hole of a town to find Anabella Pouge and bring her back to the pack. When Russell Masters gave an order, you followed it or risked the consequences.

Finding Anabella was like searching for a needle in a haystack. No one in town knew anything about her, and when he showed her picture, he caught a vague sense of recognition but nothing firm. He didn’t know if his being a stranger factored into their response and if the town was circling the wagons to protect their own, or if they really didn’t know anything about the woman.

David had been in town three days, and he knew he would have to call Russ this morning to inform him of his failure. He’d never let his alpha down before, and being the bearer of bad news left a bad taste in his mouth. Hopefully, Russ would tell him to come home, but David feared that would not be the case.

He couldn’t stay in the town much longer. The urge to change to his wolf form rolled over him constantly, but David didn’t want to risk transforming in this unfamiliar place. Frustration at his failure made the urge stronger, and each day he struggled more with the wolf within.

Where the hell could she be?

David waved the waitress over for a cup a coffee. He pulled his phone from his pocket to call Russ, then he caught a scent in the air—a new fragrance, fresh and musky all at once. It smelled like home and set off a hunger he’d never felt before. He turned, trying to locate the source of the essence.

Then he spotted her, and his body went on high alert.

The woman made his heart stop. Beautiful didn’t even begin to describe her. The goddess—all curvy and lush—caused his libido to go haywire, making his cock swell and throb. Usually lust didn’t hit him this hard or fast. It had to be the heavenly aroma coming from the woman. She looked to be close to six feet with long, flowing red hair. He wanted to tangle his hands in it and pull her to him for a kiss. He tried to shake it off, but the urge became stronger, almost like a spell compelling him to go to her.

When she turned around, their eyes locked. He could easily drown in their liquid, green depths. She blinked, and the spell shattered until her tongue darted out to lick her luscious, red lips. He felt his cock swell even more.

Her face turned a beautiful shade of rose. David wondered if she could see the tent his dick created in his pants from looking at her. He got up from his table and took a step forward then hesitated when he noticed her backing away. She slipped out of the diner, but David’s eyes never left her.

“Shit!” Max slammed his beer onto the bar creating a big party foul with the amber liquid sloshing out of the bottle. Couldn’t he have a moment to enjoy his drink? Was that asking too much? It must be, because the fates were not on his side. That damn reporter was nosing around again. She’d been dogging his tail for weeks. Every turn he made, she seemed to be there. Normally he would like the attention because of how hot she looked with her short brown, almost black, hair and her dark brown eyes that were starting to haunt his dreams, but she wasn’t after him for a quick fuck. She wanted something more, a story on him and his pack. Not happening, no matter how cute she looked. It seemed as if the reporter had shown up the night Bella had told him to watch out for the brunette at the end of the bar. And that evil wink Bella had given him? Max sure hoped the brunette Bella spoke of didn’t turn out to be this reporter, but that twinkle in Bella’s eyes told him not to overlook the possibility.

And, just his luck, the woman sauntered his way and it happened again, that feeling deep in his chest like his heart was going to be ripped out. Every fucking time she got close, he would feel these urges he didn’t want to think about.

Fuck. It wasn’t his night.

“Why can’t you get the hint? Fuck off—I’m not going to tell you anything,” Max said as the woman settled onto the stool next to him. He took a swig of his beer, hoping she would get the hint and leave. Usually he left before she got this close, but he wanted to confront her and get it over with because this shit tired him no end and he hated being chased out of his favourite bar.

“And hello to you as well, Maxwell. No niceties from you, I see—straight to the heart of the matter. Not that I’m surprised. Maybe you’ll let me introduce myself this time before you run out of here again with your tail between your legs. Oops, did I say that out loud?” She winked at him. “My name is Valerie, by the way, Valerie Thomas. You’re not scared of little ole me, are you?” Valerie ended with a grin.

She held out her hand, obviously expecting him to do the polite thing and respond in kind with a handshake. She waited with a smile on her face, but Max just looked at her hand until she pulled it back. Taking her hand in his would not be happening, with the hunger rolling through him. And when had she learnt his name? Fuck, and had she just said Valerie? He did a double take.

Fuck, fuck, fuck. That was the name his dad had whispered through his head before he died. Max took a closer look. He’d never really studied her before now, but damned if she didn’t look like the vision from his father.

If he touched her, especially now, he might just throw her down on the floor and be done with it. Taking a deep breath around her seemed like a bad idea. Her scent wrapped around and through him. Damn town should learn how to shut up. If he found out who’d talked—

“Look, I just want a little information on your family. It’s a little odd having all of you live in that house. You are all related, right? And what happened there a few weeks ago? Is it some kind of cult? What can you tell me about Russ Masters? Who—”

Max just managed to hide his grin when Valerie jumped at his loud command. Maybe he could have a little fun.

Not going to happen. She is too dangerous.

He couldn’t let his libido take charge on this one.

“Can’t you get the hint? I’ve never responded to you before now. Showed no fucking interest and left before we could talk. So let me say this flat out so you can understand. Stop with the questions. I’m not going to answer them. No one around here will. Let me sit here and drink in peace. Just shut up!” Max said in a harsh voice, anything to get her away from him.

“I’m not leaving, Max. If you don’t answer my questions, someone will, no matter what you say. I just wanted a little inside perspective before I write my article. I don’t want it to be one-sided, but if you won’t talk and I can’t get anyone else from your family to speak to me, then I’ll run the story as-is.”

“Are you still talking? I don’t give a flying fuck what you write, just leave me and my family alone.” Max threw some money on the bar and started for the door, but he could feel her behind him. He hoped like hell she wouldn’t follow. He could only hold on to his wolf for so long, and it wanted a piece of the reporter.

Max didn’t care about the story. The pack had lived through worse, and if Russ wanted to ignore it, then he would too.

Max had almost reached his car when a terrified scream echoed around him.

God damn it, this really isn’t my night.

He turned and ran towards the sound. He didn’t expect the sight before him and stumbled to a stop in shock. A giant leopard in the parking lot would do it. Valerie was cornered as the leopard stalked her. He only knew of one were-leopard around here and Zareb didn’t leave the house unless forced to, plus Max didn’t think the other shifter would be assaulting someone. ‘Fuck’ didn’t even begin to describe the feeling flowing through Max’s body. He didn’t like secrets and somebody had one. Max didn’t stop to think. He changed into his wolf form and charged the leopard before it could reach the girl. The two collided in mid leap.

Passion held many surprises for Max and Valerie and it was only beginning. I can't wait to see what the next installment to this pack brings after seeing what the first two couples have gone through....

Share what you thought about Seeds of Dawn: Vol 1 PRINT and earn reward points.