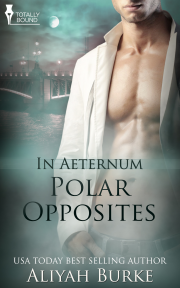 Book 4 in the In Aeternum series

Despite differences and difficulties, love is always capable of finding a way to take root and bloom.

Ivan Vinokourov wasn’t sure he’d ever get over losing the love of his life to another man. However, after he’s kidnapped, the woman sent to rescue him stirs emotions he’d believed were gone forever.

Bailey Hyde is an assassin for Theta Corps—that’s what she does, so she doesn’t understand why she’s being sent in for a retrieval. The man she’s tasked with rescuing is different, and she finds herself attracted to him. He’s a scientist, not the type she usually goes after. Still, he intrigues her.

Despite her misgivings about being involved with someone she’s rescued, they begin a relationship. He’s amazing yet they continue to butt heads over her work. When her past is revealed, Bailey isn’t sure of anything anymore, even Ivan. Can what they have withstand the fact that they are polar opposites? Or are they destined to go back to being alone?

Biting back his groan of irritation at being disturbed, Ivan turned his head, tipping it to peer over the tops of his shades. A large, dark-skinned man stood there, powerful arms crossed and reflective sunglasses hiding his eyes.

“Must be important if you tracked me down here.” There were around two thousand residents on this island. Most people who arrived here were outsiders—scientists or naturalists.

“It ain’t about the colour of the sky, that’s for sure.” He lowered himself to the sand beside Ivan, apparently uncaring about what it may do to his pants. Silk, from the looks of them.

“Kevin. Kevin McNeal.” He stared like Ivan should know the name.

“I work for an organisation called Theta Corps.”

“We want you to come work for us.”

“Your reputation precedes you.”

And flew as if it sprouted wings. Shifting on his chair, he stared out over the Indian Ocean and hooked his ankles. “What rep would that be?”

“Dedicated. Hard-working. Extremely smart, and one of the top physicists in your field.”

“Reputations can be falsified.”

“They can be. In this case, they’re not, Dr Vinokourov. We know it’s true.”

“And how do you know so much?”

“I know more than you probably think. I know of your training by Dr Thompson and your work with Dr Jaydee Cassano on electrogravitics.”

He shook his head. “Sorry, I have no clue what you’re talking about.”

“I admire your commitment to keeping it a secret but I know Valentino Cassano, and Theta Corps does its homework.” He draped an arm over his raised knee. “You can deny all you want but we both know the truth. And that’s why I’m here. We want you to work for us.”

“A man of your talents would be extremely useful to our organisation.”

Valentino Cassano. Jaydee’s brother-in-law. Nope. He didn’t need to be close to anyone—be it location-wise or friendly—who was close to her right now. Ivan shook his head and rose, his momentarily discovered peace spoilt for the present moment. “Thank you, but I must decline.”

“You’ve not heard what I have to offer you yet.”

“No need for me to listen or for you to waste your breath. I’m not interested. Period. Good day, Mr McNeal.” Ivan walked away and didn’t once look back. He’d meant what he’d said—he wasn’t interested. Why continue to torment himself with the knowledge of what he couldn’t have or who he would never be?

He didn’t return to his hotel room, it wasn’t where he wanted, or needed, to go right now. Instead, he made his way down the beach. He shoved his hands in his pockets and tried his best to forget the name of the one woman he’d loved. Jaydee Amos.

No, that’s not right, she’s Jaydee Cassano now. He’d offered to marry her. He loved her. A foolish endeavour he now saw, for never had her emotions been as vivid as when they involved Giovanni. Part of him would always love her, he knew that. Nevertheless, it was past time for him to move on. Something else he knew.

Easier to say than to do.

It had been hard for him these past few years. To see the woman he loved married and with a family of her own. A family that should have been his.

Things fall as they do and there’s nothing that said she was to be mine or nobody’s. Again, words that were easier to say than necessarily believe.

He veered from the shore and onto one of the numerous walking trails. Perhaps a visit to some fissure caves would do him good. All he knew was he didn’t need to go back and talk to some man who’d tracked him down.

Why me and why all the way out here?

It wasn’t Bali, or Monte Carlo. Hell, it wasn’t even Rio. It had been a deliberate choice for him to come here. And to have this man know about him and what he’d done, come here and track him down…? Yes, colour him suspicious. He’d never heard of Theta Corps before. Didn’t do much interaction in regards to Valentino Cassano. Sure, he’d seen the man a few times—he’d married Jaydee’s friend Lexy. However, they weren’t personally friends.

He nodded at some people who were meandering by him. This wasn’t a gambling spot, or one for races. He had come here because it was for those who loved nature. He continued, stepping past others on the trail. Over half of this island was a national park.

Eventually he got lost in his musings as he explored and enjoyed his day. Passing by two women, he smiled at them, chuckled when one whispered to her friend, and giggled as her face flamed. Despite the blatant invitation in her gaze, he traipsed on, not wanting to follow up on her hollow offer. He needed something more than just sex and this woman didn’t have it, which was why to him, it was a hollow offer. Ivan was at the point where he wanted more than just meaningless sex with a stranger. He wanted to feel some type of connection with them—more than just a physical one. That woman barely got a physical one from him.

It wasn’t until later that afternoon that he headed back to his hotel room. He slowed when he saw a couple arguing on the trail. Christ, can’t you keep it private? People don’t come here to listen to your bitching. He moved to the other side of the trail to skirt around them when something hard clipped him in the back of the head.

Stars flickering, he dropped to his knees and peered behind him. No more arguing couple. They looked intent on causing him harm. The woman raised a gun, aimed it and pulled the trigger. He tried to yell but nothing left his mouth. Fingers on the side of his neck, he encountered the dart sticking out and swore moments before he succumbed to the darkness blanketing him.

The knock at the door made her pause. Bailey Hyde shoved home her boot knife and sighed. She tugged her jean leg over the black leather with a three and a quarter inch heel. A quick perusal of her attire then she moved to answer the person on the other side. She didn’t check to see who it was—only one person knew she was here. He’d sent her.

“What, McNeal?” She posed her question once she’d thrown open the door.

“My every dream come to life,” she said drolly.

He brushed by her, the fall of his silk shirt and pants perfect—the man never seemed to be a mess. He was her boss in the group she worked with. Theta Corps. Throughout the organisation, there were smaller groups of people who tended to work together. Except a few who were loners and did one specific job—assassinations. And she was one of the best.

“You, Bailey, are such a charmer.”

His words carried no heat and she took no slight at his sarcasm. She shut the door behind him then leaned against it. Arms crossed, she waited for him to let her know what the job would be.

“You’ve never come for a social call, I’m not buying it. Who do you want me to kill?”

He exhaled sharply. “No one.”

She raised an eyebrow. “So this is a social call? I told you I was fine and didn’t need to be pulled from work.”

Kevin McNeal walked farther into her small place. A studio apartment, there wasn’t much in the way of personal items. A few magazines purchased from the store, but nothing that had been addressed to her.

“We worry about our people, Bailey.”

“If this isn’t about a job, what are you doing here?”

He turned his dark head so they had eye contact. “I didn’t say it wasn’t about a job.”

“I didn’t want you to kill anyone.”

She walked to the tiny kitchen then filled the coffee pot and turned it on. “I’m not following.”

“I need you to go rescue someone.”

She didn’t even pause in getting mugs. “I don’t do that.”

Share what you thought about Polar Opposites PRINT and earn reward points.