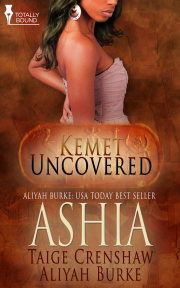 Book 6 in the Kemet Uncovered series

I am referred to as the "Hidden One" and personification of the life-bringing northern wind. As one of those who constitute the Ogdoad, I am respected by others and sometimes even feared. Yet I am adrift when it comes to interactions between a man and a woman.

The rules are so confusing and I try to find my way with him—Reid Jacobs. He is a man that makes me, a goddess, wonder how I have done without the coursing need for intimacy. With each touch he unravels me and makes me lose every ounce of my control. I want him more than breath itself but…I will not settle for anything but total acceptance of everything I am.

Taige Crenshaw has been enthralled with the written word from the time she picked up her first book. It wasn't long before she started to make up her own tales of romance.

Her novels are set in the modern day between people who know what they want and how to get it. Taige also sets her stories in the future with vast universes between beautiful, strange and unique beings with lots of spice and sensuality added to her work.

Always hard at work creating new and exciting places Taige can be found curled up with a hot novel with exciting characters when she is not creating her own. Join her in the fun and frolic, with interesting people and far reaches of the world in her novels.

Share what you thought about Ashia and earn reward points.

Other books in the Kemet Uncovered seriesView Series Page