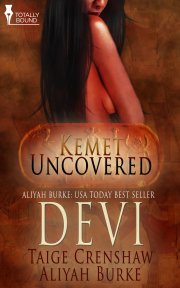 Book 2 in the Kemet Uncovered series

I am the goddess of time, immorality, and the cycle of life/death. Slow to anger, easy to smile.

Now I work with babies and the young of humans since they are innocents. It was there I met him. Rhodes Liatos.

A man unlike any I've known before. He challenges my disheartened beliefs of the human race. He has taught me many things one of which was how to love. He is a man who loves life and has no fear of death, what happens when he learns who I truly am?

The air flowed over her, crisp and cool. Petner stared out over Cathedral Valley. Around her, rock climbers called to one another as they scaled different formations in the park. One of her favourite spots in this entire country—perhaps in the world. All the different visual displays, the beauty it exuded and the calm it brought her only enhanced her attachment to the park. You could see Pikes Peak when you entered the park, and the views offered were nothing short of spectacular.

knew every inch of the place, having come here on numerous occasions with friends to hike, rock climb, horseback ride, bike and more. There was something for everyone.

She sighed and turned to leave, only to find herself face to face with a man she’d never seen before. He had a cap pulled low over his eyes, shielding his features from her and rendering himself unrecognisable. Tall and beefy, he could pose a threat…to most.

She blinked and glanced down at her watch. She was close to running late.

“Morning,” she said calmly, and made to move beyond him.

“I don’t think so,” he said in a low, gravelled tone. He moved one arm, opening his unbuttoned, long-sleeved shirt, exposing the butt of a gun stuck down his waistband. “You and me, over there.” He jerked his head to the side, indicating where he wanted her to go.

What a way to ruin my morning.

A couple with a young girl came around the corner of the path, and nodded before stepping closer to him. She didn’t want him to panic and shoot one of the passers-by, because that would really piss her off. With a smile pasted on her face, she exchanged morning pleasantries with the passing trio. Once it was just her and the unknown man with his gun, he took her arm and led her into a small copse of trees at the base of a hogback rock formation, out of view. The ‘hogback’ name came from the ridge and its resemblance to the knobby spine between a hog’s shoulders.

“Any sound and I’ll shoot you,” he growled, shoving her towards a tree.

righted herself, turned, crossed her arms and glared at him. “Like a gunshot won’t bring people running to investigate.”

He seemed taken aback by her unwillingness to cooperate with him, and withdrew the gun, waving it at her. “Undress.”

She narrowed her eyes. “Did you know there are over three thousand acres that make up this park?” she asked conversationally. “A person could be dead out here for a long time before anyone found them. I mean, really, how often do they conduct a thorough search of every single acre?”

“Why? You’re not going to shoot me and I’m not undressing for you to put your slimy paws on me.”

“Are you stupid? I’m holding a gun on you. I could just shoot you,” he spat.

“You imbecilic human,” she growled. “Always thinking just because you have some form of weapon you are stronger. I dislike men who threaten women—especially me. Give me your gun.” She held out her hand palm up, beckoning with her fingers.

He gave a hysterical laugh and shook his head. He sniffed and wiped his hand under his nose, waved the gun again, then cocked it.

“I had hopes for your kind.” lifted one shoulder languidly.

And she had, but it seemed that the further along time flowed, the older the Earth became, the worse humans treated one another. They had turned it into an art form, coming up with so many new ideas and new weapons with which to inflict pain on each other. It saddened her. If only they would deign to turn their energies to cures and ways to better and enrich their lives.

“My kind?” He seemed to shake off his uncertainty. “Bitch, I don’t care who the hell you are, what you think you are or what kind of karate shit you know. This gun will stop you in your tracks if you don’t give me what I want.”

Taige Crenshaw has been enthralled with the written word from the time she picked up her first book. It wasn't long before she started to make up her own tales of romance.

Her novels are set in the modern day between people who know what they want and how to get it. Taige also sets her stories in the future with vast universes between beautiful, strange and unique beings with lots of spice and sensuality added to her work.

Always hard at work creating new and exciting places Taige can be found curled up with a hot novel with exciting characters when she is not creating her own. Join her in the fun and frolic, with interesting people and far reaches of the world in her novels.

The plot is filled with intense passion, betrayal, heartache and a sweet romance...All in all, I found Devi to be a good read.

Share what you thought about Devi and earn reward points.

Other books in the Kemet Uncovered seriesView Series Page