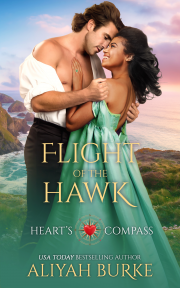 Flight of the Hawk

Book 2 in the Heart's Compass series

Love’s truth can lend the strength to help you take flight.

Dying on the battlefield wasn’t at all in Colonel Trace Morgan’s plan, but battles rarely go as hoped. Only, it wasn’t his time to die and when he wakes, blind but the sole survivor, he has to put all his trust in a woman who stirs him in more than one way. With her help, he learns to navigate his new world of darkness, but he craves seeing her more than anything.

Leona is an artist, one who rarely deals with other people. The near dead man on the battlefield brings back so many memories. Their once severed connection is lifted back into existence and she can’t continue to ignore her feelings. But it’s to much and she has to leave before he sees who she is.

Trace refuses to let her go, he has so many unanswered questions. With his son, he tracks her down and tries to convince her to give them a chance. But their past refuses to release it’s claws in them and pulls them back into the divided world neither want to belong in. When it’s her life for his, Leona cannot refuse, she will do anything for the man she loves. Trace has never known fear like this, can he save not just himself, but Leona as well? Will there be a chance for them to take flight together and be the family he’s always wanted?

Share what you thought about Flight of the Hawk and earn reward points.

Other books in the Heart's Compass seriesView Series Page

Buy Now: £4.99
The Princess and the Marquess
Aliyah Burke

Buy Now: £9.49
The Princess and the Marquess PRINT
Aliyah Burke