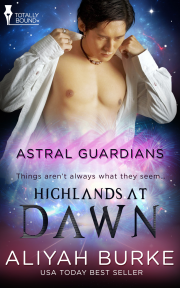 Book 2 in the Astral Guardians series

Things aren’t always what they seem…

Billy Kwan has been sent to Scotland to look into some unusual activity caused by one of Them. What he discovers is not only another artifact, but his mate, and his entire reason for being there has changed. Now, protecting her takes top priority.

Malmuirie ‘Mal’ Gordon is a surgeon, and used to stressful situations, however, when she meets Billy it’s unlike anything she’s experienced before. Together, they might just be able to remain alive long enough to make it back to Oregon and start their life together.

William ‘Billy’ Kwan hung back as he trailed the disciple of The New Order down St Vincent Street. He’d been here a few days now and had seen some of the destruction up in the Highlands. People were referring to it as an act of nature. He knew better.

On his way back to the city, he had discovered himself on a bus with this guy who seemed to have a set destination in mind. Billy knew he was a member of The New Order because of the mark on his neck, their symbol. So he’d opted to follow him and see what was going on. Find out what it was he could ruin for The New Order. He’d not found whatever it was They had been after in the Highlands, but he wasn’t going anywhere yet and would head back up to take another look around.

He spied it the same time The New Order fanatic did. A faint trail of gold dust that to someone who didn’t know what they were looking for would have come across as naught but dust particles gleaming beneath the streetlights.

It wasn’t fair to the one who emitted that signal, for they typically didn’t know what danger it brought them. He picked up his pace, needing to do his duty and help protect whomever the particles were from. To lose a mate for one of his brethren wasn’t an option. The artifact could wait a bit more.

The man he was trailing increased his speed until he was moving through the patrons on the street at a near jog. Billy increased his speed as well but did it so he didn’t appear as if he were following. Not that it would have mattered—from the looks of things, this man was solely focused on the gold dust trail.

The New Order man stopped and looked around. Billy knew he’d lost the dust trail and walked by him, since he personally hadn’t lost it. It had, however, gotten much fainter. He continued up the well-lit street until it guided him into an establishment. King Tut’s Wah Wah Hut.

The name gave him pause until his eyes picked up the faint trace once more, reminding him of his objective. If the dust went in, so would he.

He moved by the open door—basically ignoring the people to his right that hung out on the steps leading up from the place—which had the name of tonight’s gig written in chalk on a board, encompassing the full inside of the door. The music, which had poured out onto the street, grew much louder as he walked in and after paying the cover charge just inside the door looked around the place. People swarmed—talking, laughing and eating. His stomach growled as he realized he’d not eaten for several hours.

He found an empty seat, thankfully with the wall at his back so he could keep an eye on the entire room. The particles had almost faded completely away with the numerous bodies in the place. He didn’t know if they had gone to a male or a female either, so his hunt wouldn’t be that easy.

“What can I get you?” a woman asked him. She was a redhead with a stunning smile.

He looked at the menu and said, “I’ll have the Tennessee burger, please and I’ll have that as a rump-steak patty.” The cheddar and bacon combined with Jack Daniel’s Tennessee Honey mustard mayo sounded good.

“You got it.” She winked and sashayed off, talking and waving to other patrons.

He continued to peruse the crowd, hoping he’d get a chance to see and potentially save the one who now had a beacon over their head—a beacon, which would only attract more from The New Order. The crowd in the place was an eclectic mix of people.

He perked up a bit when the man he’d been following entered and scanned the room. When their gazes met, Billy gave him a brief nod before smiling at the woman who returned with his drink.

Another wink and she was gone again, slipping through the throng. He thought he caught a flash of gold by a group of dancing women but he couldn’t pick just one out of the bunch.

When his food arrived, he dug in happily. He’d just finished when he saw it again. Stronger this time—and leaving. Whomever it was with had a hoodie pulled up over their head as they slipped from the place. This time he also thought he noticed wisps of indigo intermixed with the gold. That’s new. Wiping his mouth, Billy dug for money to cover the meal and shot off after the person in the dark blue.

It was definitely them—he could see the gold much easier now that they strode along the sidewalk. His power flared as he walked around a corner and he slowed, searching for the danger. It came from behind. The New Order fool jostled him out of the way as he hurried by.

Billy grabbed him and slammed him into the brick wall of a building. “I don’t think so,” he ground out.

He shoved him into the darkness of the nearby alley. “Guardian,” he said arrogantly.

“Fuck you. I won’t tell you anything.”

“Don’t want you to.” He hit him in the jaw and waited.

The man’s blue eyes grew wide as he realized what had just happened. Sure enough, not much later white foam appeared at the corner of his mouth. Billy had popped his cyanide pill. Billy laid him on the ground and slipped back out. Guess I didn’t want to find out what he wanted after all.

Damn it! He hastened up the street, searching for the particle trail. There! Across to the other side and around the corner. Billy jogged between the slow-moving cars and made his way to it. The sign was fading fast. Whoever I’m chasing is moving at a good speed and is going faster.

Lengthening his stride, he followed it until he reached another building. Really? A hospital? Billy double-checked he hadn’t made a mistake in where it went. Nope, he hadn’t.

He strode into the emergency room and glanced around. No sign of the person who he’d chased here. There were people sitting in chairs throughout, awaiting their turn. Men and women in scrubs ran back and forth. He didn’t understand the words with the thick brogue but he got the gist. An emergency approached.

Sirens preceded the actual arrival and he stepped aside as staff members came running forward. They wheeled the gurney toward the doors and he narrowed his gaze when he saw two men step out of the shadows with weapons drawn.

Security stepped forward as did he, unwilling to sit by and let innocents get hurt. A woman in a white lab coat and stethoscope lifted her head and speared the leader with a glare.

“What are you going to do with that? Shoot me? This man has two bullets in his chest cavity and you come in here waving that gun around like it’s your own damn playground. You want to shoot me? Go ahead—and he dies. If you want me to save him, get the fuck out of my way and let me do my job.”

The man backed down.

Share what you thought about Highlands at Dawn and earn reward points.

I was asked what advice I would give to aspiring authors. To me this is a hard question because I am still seeking advice from authors who’ve been doing this for much longer than I have.

I write novels that cross a variety of genres and sub-genres where the heroines are strong women with jobs sometimes people don’t associate with women. They are strong and don’t need a man but they are with the hero because they want to be.