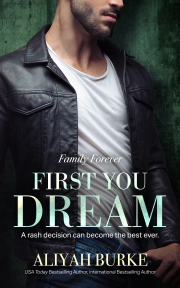 Book 3 in the Family Forever series

A rash decision can become the best ever.

Race car driver Cody Gamino has come from Europe to the United States for one thing. To race with the incredible Xin. Their one night together means more to him than he expected and suddenly, it's not just about racing together, but about being together too. Forever.

Racer N'Jelle 'Xin' Marx turns to a handsome man she met outside a bar, just to forget for a night. Six weeks and two pinklines later, she is questioning the decision she'd made that night. When he shows up at her job, revealing to her who he truly is, and snatches it out from under her, she doesn't have the fight in her any longer. She leaves.

Cody isn't one to give up and when he learns of his unborn child, he digs in even more. Will tehse two, used to life in the lane, learn to slow down and see what is before them? Will they recognize what they have to lose?

Share what you thought about First You Dream and earn reward points.

Other books in the Family Forever seriesView Series Page

Buy Now: £4.99
The Princess and the Marquess