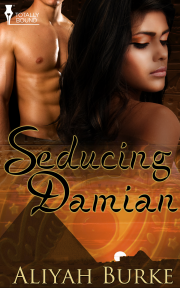 Can a mortal man, without magic or coercion, bring a goddess to her knees just with the power of his love?

Damian Keith teaches Ancient Egyptian history but his love lies in the magic of mythology. An amateur collector of artefacts, he spends much of his time reading ancient books. Lately his dreams have been invaded by a woman whose touch leaves him breathless and wanting more. Much more. But she never reveals her face to him.

Amenitre Seini is really the Egyptian goddess Sekhmet. Mortal, Damian Keith has enthralled her like no one before. She visits him in his dreams until she can no longer resist the urge to touch him while he's awake and heads to Earth.

Do they stand a chance at a future together or will Damian push her away once he learns of her deception and who and what she truly is? Can she convince him her love is real and that only in the beginning was it about…

That feeling was back...again. Barely containing the shiver—although not entirely unpleasant—that coursed through his body and made him weak in the knees, the man cleared his throat and swallowed before continuing with his lecture.

“Are you okay, Professor?” a student asked from the front row.

The man nodded his dark head and flashed the students in his class one of his winning smiles. The women longed to have that smile mean more than it ever would. His classes were always full. Both men and women wanted to take his class. He taught with vigour most people didn’t see anymore. He taught about ancient Egypt. Although, truth be told, Egyptian mythology was his true passion.

“I’m fine, thank you.” His voice was deep and soothing; the sort of voice that could offer comfort or bring immense pleasure, depending on how he wanted it to be heard. Blinking, he put his eyes back on his class. “Now, where was I?”

“Just about to tell us about the Valley of the Kings,” the same student spoke.

He grinned and responded, “So I was. Okay.” He swept his gaze across the smaller group study he was doing today. There were only about fifty in this class. Damn, Damian, you have got it made. Then he continued with his lecture. In spite of everything, his love of teaching and his love of the very subject, Damian Memphis Keith still felt that unknown presence.

As the students were filing out of the lecture hall, Damian began to tuck his own papers in his satchel. A warm breeze blew over him, causing him to look up in suspicion. On the air, the faint scent of lotus blossom lingered, tantalising his nose like no smell ever had, at least not while he was awake. The hair on his body seemed to stand on end as if filled with an electrical current.

What the hell? Damian shook his head and tried to focus on what he was doing. Instead his gaze was drawn to the far corner of the room. He could barely make out the image of a woman bathed in the sunlight from the large windows. At her side were two lionesses, at least he thought they were, for they were also hard to discern.

“Professor?” A voice shattered through his haze. Inhaling deeply, Damian opened his eyes to see Kathryn Harrison standing before him. She was one of his best students. The only downfall...she wanted much more than a professor-student relationship.

“Yes, Ms. Harrison? Something I can do for you?” Damian shoved the rest of his papers away.

“I was just checking to make sure you were okay,” she admitted. “You looked a bit dizzy earlier and just now you were staring off into the corner at something only you could see.”

Risking another glance to the corner, all he saw was the sunlight filtering in the window. No woman, no cats, nothing. He frowned briefly before he turned his attention back to the woman before him. “I’m okay. Thanks for the concern. I guess I am coming down with something.”

Damian picked up his briefcase and tossed his leather jacket over his arm. “I will see you tomorrow, Ms. Harrison. Again, thanks for the concern.” Long strides took him up the steps in the lecture hall and through the door.

Share what you thought about Seducing Damian and earn reward points.