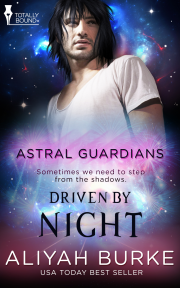 Book 5 in the Astral Guardians series

Sometimes we need to step from the shadows.

Tiarnán Malone is one of the best warriors of the Guardians. Sent to meet a woman to pick something up for his mentor, he saves the woman who is to be his mate. And his artifact. Circumstances throw them together, but while he knows they are meant to be, she isn’t as easily convinced.

Calida Michaels can’t complain about how her new savoir and companion looks. However, she’s not so quick to buy this ‘mates forever’ talk, especially when there’s another woman who takes precedence over her, time and time again.

Despite all that’s going on around her and her feelings for him, Calida eventually leaves, unable to withstand the pain. Will Tiarnán reach her in time or will she be gone forever, relegating him to a world completely driven by night?

Tiarnán Malone sniffed, wiped his hand under his nose, and shifted only to still as his advocate leveled a glare at him. He scowled up at the judge who matched him glower for glower.

“Not pleased to see you back in my courtroom again, Mr. Malone.” The judge rested his arms on the smooth wood and leaned forward. “I believe last time we agreed you wouldn’t be back here.”

He altered his weight, fearlessly holding the man’s assessing and disappointed look. Like I want to be here standing before you. Get real, dude. “I’ll leave.”

The judge frowned and readjusted his glasses. “Not quite yet, son.” He glanced at the sheets before him. “More stealing.” A pointed look. “What do you have to say for yourself?”

His attorney nudged him. “Answer His Honor.”

“Ain’t got nothin’ to say. He’s gonna believe what the others tell him anyways. Why speak?”

He shoved his hands in his pockets only to rock back on his heels. Peering over one shoulder, he swept the courtroom with a disinterested gaze, pausing when his stare landed upon a rail-thin black girl sitting in one of the rows behind him. Tears streaked down her face but the fear in her expression was what truly set him on edge. He didn’t like it. Before he could—even had he wanted to, which he wasn’t sure he did—offer a smile of encouragement, she averted her face and stared down toward her feet.

Tiarnán remembered his first time before a judge. Tears had threatened him then. Now, whatever. He’d stood here so often it was almost becoming a second home. Adults believed other adults, not children. He was considered a troublemaker. Thug. Delinquent. And other words along those lines.

At the nudge from the man by his side, he faced forward with a low snarl. He truly hated being pushed around. A hollow thunk trailed by a light, tinkling sound overshadowed all other noise. Including the judge’s booming voice.

What was that? Am I hearing things? No one else seems to have heard it for the judge never stopped talking.

“Pay attention!” Harper, his attorney, snapped under his breath.

“Did you hear that?”

“That’s my point. You need to listen to the judge.”

So not what I meant, dude.

It came again. And a third time, which had him looking around the room. To see where it had come from and if anyone else had heard it. That black girl stared over her shoulder at something and he moved along her line of sight.

He located a man seated on the bench closest to the door. Asian. Dressed impeccably. His black suit screamed wealth and the man appeared to be looking between him and the girl. Then he stared directly at him, lean fingers resting upon a cane between his legs. The hairs on the back of Tiarnán’s neck stood up.

The man’s gaze remained steadfast before he lifted then set his cane down. Again the hollow sound followed by the chiming. Tiarnán felt weird and wanted to take a seat.

He ignored the muttering from his attorney and slowly, as if he had all the time in the world, faced the front. Along the way, he winked at the girl who, it seemed, had been the only other person who’d heard what he had.

The judge apparently hadn’t expected him to respond thusly. Nor did he approve. Thick, graying eyebrows rose minutely then converged.

Tiarnán shrugged. “I answered your question.” He tossed his head to move his hair, which had fallen forward over his eyes. “You’re boring me.”

Laughter and chuckles burst sporadically throughout the courtroom from the younger children in occupancy. He knew this sentence handed down would be more severe than the previous ones. The faint laughter echoed in his mind and he turned in time to see the older gentleman leaving the room, the door swinging shut after him.

Prob comes in to get his rocks off on watching children get into trouble. Whatever. He didn’t care. Adults couldn’t be trusted.

“I’m sorry, you want me to do what?” Tiarnán stared at Lian Yang from where he stood in the back of the room, arms crossed as he leaned against the wall.

“I did not slur my words, Tiarnán. Nor did I stutter. You heard me just fine.”

Lian sat ramrod straight at his large desk, in typical fashion. Tiarnán didn’t believe the man had it in him to slouch. The dark wood, lined with intricate scroll work, had a surface so shiny he could see his reflection in it. A lot of time and energy went into keeping it in such shape.

I should know, I spent enough hours doing it. He sighed and shook his head, focusing again on the man who’d taken him in and not only given a roof over his head, but a home. And a family.

Lian didn’t look any older than when he’d brought Tiarnán here. Neither did those eyes miss anything, though years had gone by.

Tiarnán didn’t ignore the summons. Yes, he was grown, but this man was as close to a father as he would ever have, and he respected the hell out of him. Passing one of the large windows, he stared out over the Oregon vineyard. It bustled with life even this early in the morning. The mist still hovered above the ground, adding a mystical quality to the view. He enjoyed this time of day, normally was out walking with the one closest to him here, Dracen.

Lian took in kids and raised them. Some troubled, others not. He helped them find their way. Taught them how to respect themselves and others, as well as assisting them in finding what it was they did best. He encouraged them to pursue their dreams. But he also demanded a lot from them. It helped to know he expected as much from himself in helping each child as he expected from them.

Seated in the leather chair, Tiarnán waited for Lian to speak again. This man just couldn’t be rushed. He wanted to push and pry but he forced himself to remain silent.

“Why do you insist on making things harder than they need to be?”

“How is my asking a question doing such things?” Tiarnán countered. At Lian’s expression he sighed. “What do I need to do?”

“Off to the east you must travel. Until you reach the place where the twin falls pour into the lake of crystal.”

“A riddle. You’re giving this to me in a riddle?”

“Combined with what I told you before, Tiarnán, you have all the clues needed. When you get there, find Mrs. Chen. She will have something to give you for me.”

He wanted to argue so much but merely nodded and stood. “Very well. Heed me well, old man. One day, these riddles will not turn out the way you want.”

A sad smile crossed his face. “Sometimes they are all we have left.” He lost all expression. “You will not be the only one after this item, Tiarnán. Be alert, and cautious of who you trust.” Lian waved his hand. “Leave me. Say goodbye before you embark on your journey.”

Aliyah Burke knows how to leave readers thinking about a story long after they finish reading it.  The story was excellent as a stand alone read, so I don’t doubt that reading the series in ord...

The story itself is a good one, and it should be read. As I said this is the fifth book in the series and it can be read as a standalone, but I would recommend that you start with the first book Keepe...

Share what you thought about Driven by Night and earn reward points.

Get hooked on a series! If you’re looking for something out of this world, the latest in the Astral Guardians series by Aliyah Burke is now available.