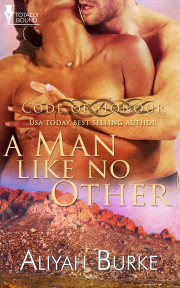 Book 3 in the Code of Honour series

Two headstrong, single-minded agents, one incredibly fiery passion, can they stay alive long enough to see where it leads?

Special Agent Taber Kysenzki is the DEA's bad boy, he has no qualms of straddling the line of right and wrong, doing whatever necessary to get the job done. But when he botches up an undercover operation, he's faced with a woman unlike any he's met before.

She saves his life but doesn't deign to give him the time of day. He'd heard rumours of an agent with his reputation in the ATF but hadn't met her until today.

Special Agent Serefina LeBenoit is the ATF's equivalent to Kysenzki. She knows all about him, how he goes through women and she doesn't have any desire to be another notch on his belt. She has a rule of not sleeping with certain men, he fits that criteria. All that changes one night a few months after their first volatile meeting, when he tracks her down in a bar in New Mexico.

Circumstances bring them together again when a killer from her past resurfaces. Together they work, skirting the line of the law, to get the murderer off the street. Sparks fly hot between them as they close in on the target. When the bullets stop flying and the smoke clears, will they ignore the chance of a lifetime?

Serefina LeBenoit cursed again as she tracked the movement through the object up to her eye.

“What’s wrong?” a whispered voice questioned in her ear.

“We have a problem,” she muttered, moving the scope between the ongoing deal and the approaching man. He wore a black vest with the letters DEA in white across the front.

He had a fluid grace about him, despite how cautiously he progressed. His blond hair was tied back, and dark glasses sat upon his ruggedly handsome face. Suddenly, he froze and glanced in her direction, a slight frown filled his features. She remained immobile out of instinct even though she knew he couldn’t spot her.

“What’s the prob?” the voice asked. It was male and belonged to Hector.

She wiped the sweat from her brow after the unknown man faced forward again. “God damn DEA agent approaching. You know they can’t travel alone.” The second the agent began moving once more, so did she. “ETA, two minutes.”

She ran with subconscious perception. Having traversed these areas countless times, she had the confidence to do so blindfolded. She ran hard. Fast. Pouring everything into it, for she knew if that man made it before her, there would be bloodshed. She stashed her earwig down the front of her bra and kept going.

He, unfortunately, was faster.

The unmistakable sound of gunfire reached her. Damn it! Sounds like it’s all going to hell over there. Have I cursed the DEA yet?

Gun deals were dangerous anyway. Throw in the unexpected arrival of a federal agent, and sure as shittin’, this would happen.

Her mood dropped even further south when she came around the final corner. DEA swarmed, they were cuffing others, her team included, and shouting to one another. A glint to the right caught her eye and she turned. There was a shooter in another corner sighting down on the agent she’d had in her own scope. She never hesitated, just took aim and fired. Seconds later, she found herself slammed on the ground, gun scattering across the pebbled ground, an agent digging his knee into her back. The hiss of pain almost slipped through but it stopped courtesy of the anger flooding her.

Black boots filled her vision and she looked up. Her blond Adonis stood there, powerful arms crossed, staring at her with blue eyes. His face was composed of sharp angles—nothing soft about him—and raw masculine strength. Intense, panty-wetting strength. The kind which would have affected her if not for the fact she was in the process of being cuffed, the small sharp rocks slicing into her skin. Even so, dude was hot.

Damn hot. And when did I claim him as mine?

He stepped forward, reminding her of a predator when she was jerked to her feet. His height added to the intimidation factor. Well, it would have had she been intimidated. As it was, she wasn’t. However, with each passing second, her ire grew. If there was one thing she hated it was incompetence. She flicked her eyes in Hector’s direction and sent him a look she knew he would understand for silence and pass it along to the rest. Then she lifted her chin and held the gaze of the man before her.

His voice, while angry, was decadent, rough-hewn and dangerous. She stared at him. He had a body to die for. One that would give her hours of pleasure to explore.

Okay, I obviously need to get laid.

The rough baritone had a deep Texas drawl to it and felt like he pulled velvets and silks across her naked body. Harsh, intense need filled her from the soles of her feet to the top of her head.

Really, really need to get laid.

Sinfully long lashes lowered when he narrowed his gaze. “Do you have any idea how much trouble you’re in?”

“Do you?” she retorted, not backing down from his acute look.

...a guns blazing interracial romance...Ms. Burke did a great job of developing the characters and balancing their romance with all the action taking place around them...I really enjoyed how Ms. Burke...

fast-paced, action-packed and full of exquisite passion...a well-written story, where the action is non-stop, the sex is explosive, the danger is energizing, and the love is everlasting. I can't...